You’ve heard it time and time again.  Farmers use radiation filled pesticides to make their juicy tomatoes and delicious corn grow faster and bigger and instead, it awakens the undead and turns them into flesh eating zombies.  Oh – and then two hippies of course are the only ones who are hip to the game and savvy enough to thwart the evil plan and save the world from zombie domination!  So cliche….. 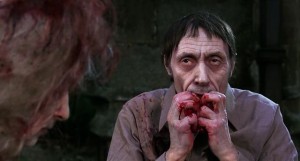 *if she only knew how much I hate her cooking*

Welcome to the world of Jorge Grau’s Let Sleeping Corpses Lie.  A groovy Italian/Spanish 70’s zombie romp that has more than enough flesh munching action as well as some over the top, but entertaining moments (naked afro chick at the beginning of the movie anyone?).  Which brings me to the point of this post and quite possibly one of the most ridiculous moments in horror movie history!

In the scene, our hero George has been on the run from the police sergeant and his crew because they think he’s a troublemaker and possibly a devil worshiper (seems sensible, right?). Unfortunately for George, he’s caught, and asks to use the bathroom after such a draining day of possible devil worshipping and zombie ass kicking action.  Now – here’s where George shows he’s not just your average dumb hippie fighting the undead. Watch the scene below and you’ll see the street smarts that George displays:

Yeah!!!  Nobody fucks with George when he has linens around!  NOBODY. (Spoiler Alert) Unfortunately for our hero, he’s shot and killed in a blaze of glory, but does return as a radiation pesticide filled zombie to exact his revenge at the end of the movie (End Spoiler).  But as I watched this scene, I thought to myself…..wait a minute…..where have I seen this before?  Then it came to me….of course!  Naked Gun!  Obviously the Zucker Brothers and Jim Abrahams were fans of this cult horror flick and that scene in particular, because they used something similar not once, but twice in their Naked Gun trilogy!  It’s the only possible logical explanation.  Don’t believe me?  Check out the clips below and judge for yourself:

And there you have it.  Doesn’t it feel good to know that a cult horror classic like Let Sleeping Corpses Lie would have such a profound influence on some of greatest comedic minds in the history of cinema?? (Ok – that’s a bit of stretch, save for Airplane and maybe two of the Naked Gun movies….oh – and Top Secret has it’s moments too).  So the next time you’re in the bathroom getting ready to dry your hands, take a moment and reflect on this monumental ridiculous horror moment. Maybe even reenact it with your significant other and share a laugh, or an uncomfortable moment if they’re not expecting it. 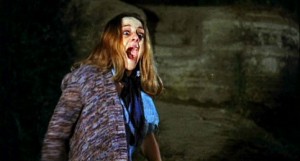 *quick! someone throw a towel on that face!*