It’s no secret that John Carpenter’s 1978 groundbreaking horror masterpiece Halloween is in my top 10, if not at the top, for my favorite horror movie of all time.  I had to change my pants on a few occasions as a child after getting a glimpse of Michael Myers in that William Shatner mask, and to this day it still freaks me out (not the ones that were in the many sequels to follow though….so terrible).  Now in addition to the unsettling atmosphere and soundtrack, there were some unintentional or maybe intentional comic relief moments to ease a little of that terror filled tension. 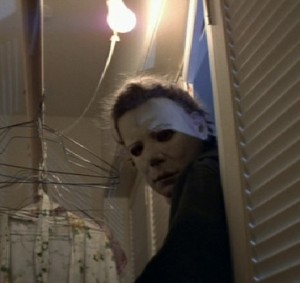 *can I borrow a pair of slacks? mine are a little dirty*

Whether it was Annie smacking her lips and chewing on the phone with Laurie, annoying Tommy falling and smashing his pumpkin, the masculine voice that came out of Annie’s mouth when she’s in the garage and says “Owww!”, or the fact that little Lindsey grew up to be a Real Housewife Of Beverly Hills – there were more than enough zingers that came out of this horror classic.

But the one that always sticks out to me, is when PJ Soles’ character Lynda just got done having some good sweaty movie sex with Bob and is relaxing in bed, thinking of what would cap the magical night off and make everything perfect.  She decides on a beer, but the only problem is that she thinks a cigarette is a beer!  Don’t believe me and my crazy agenda?  Check out the clip below:

She clearly hands him the cigarette and asks him if he wants a beer and he replies “yeah…” and takes a hit off the cigarette!  Do they really not know the difference between a beer and a cigarette?  Am I really stretching to make this post work?  The answer could be yes to both questions, but we’ll never really know.  Actually we could know – all we would have to do is ask PJ Soles or John Carpenter or even the guy who played Bob, but that all seems too easy. And we could also remember that Bob does indeed get up and go to the fridge to get them a couple of frosty brews, but let’s leave this mystery open for interpretation and call it a day, k?

*after you finish that, the lawn needs mowing Michael (said in nagging wife voice)*