As with any anthology movie, you’re going to have some of the stories faring better than others.  The problem with V/H/S though is that it’s so uneven and starts so strong, that by the time the end of the movie came, I felt like it had already blown it’s load waaaaay too early.  Hey – it happens to the best of us buddy.

For those who don’t know or haven’t been following my posts (shame on you!), V/H/S is the tale of a group of mischievous punks who run around doing what all mischievous punks do:  wearing ski masks and accosting women in parking garages, lifting up their tops and showing their breasts, then one of the guys videotapes it and puts it on the internet for a quick $50.  Classy.  But they have a chance to move up to the big time when someone offers them some cash to break into a home and steal a VHS tape. Only problem is, they don’t know what the tape looks like, so they search the house and one by one, they each watch separate VHS tapes that end up being our 5 anthology short stories.  It’s a decent set up if you can get past the first 10 minutes of nauseous shenanigans. 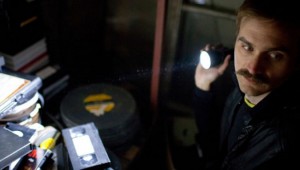 *if you find the Star Wars Holiday Special VHS, let me know*

The first short story and probably the most effective is ‘Amateur Night‘.  Drunk douchebag guys at a bar hitting on some chicks, doing some coke, then doing the nasty.  After you watch this one, you’ll definitely have to pause if a girl ever says “I like you…” at a bar again.  The creep factor is immediately introduced and it makes the most of it’s short story format by packing in the sex, blood, and creature effects so you can get your money’s worth.  Set the tone for sure and I was all buckled in and ready for a fun ride!

Then we get Ti West’s contribution ‘Second Honeymoon‘ which took a different approach, but was just as effective.  This one is about a husband and wife who set out on a vacation/road trip and stop off in a Old West town full of cowboy animatronic fortune tellers and everything!  Good times, right?  Not so fast.  A creepy girl does some door knocking and we spend the rest of the time figuring out just who she is and what she wants.  By the end of this one, I’m thinking, “Alright! We’re two for two!”.  And then the third story came……. 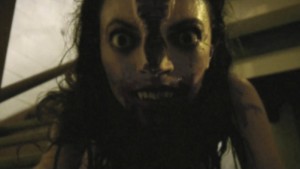 *she has a splitting headache – yuk yuk yuk!*

Talk about coming to a screeching halt with some bad brakes.  Up comes ‘Tuesday The 17th‘.  Even the title made me groan when I saw it in the credits.  Bad acting.  Bad effects.  Bad story.  Bad. Bad. Bad.  I’m usually pretty forgiving, but I think I got up and took a sh*t during this one (pun intended of course).

Up next is ‘The Strange Thing That Happened To Emily When She Was Young‘.  A woman and her boyfriend share some face time while away from each other on Skype. Awwwwww – young love.  And look – there’s the 10th pair of boobs I think we’ve seen in this movie!  Things go wrong though when Emily thinks her apartment is haunted. Will she find out if it is?  Will her boyfriend protect her?  Will we get to see our 11th pair of boobs?  Only time will tell and I had a decent time with this one.  Acting left a little to be desired, but it slowly brought me back into the overall feel of the movie.

*oh my god! your chest is unproportionately hairy!*

Last but somewhat least is the hokey, but fairly creepy haunted house story ‘10/31/98‘. Four friends hit up a Halloween party at a house that has more going on than bobbing for apples (Do people still do that btw? And why did they in the first place?).  Hands come out of walls, evil spirits pull people in the air, and our heroes “rescue” a girl who obviously had some issues to begin with.  Overall this one hit the mark, but would have been better had it kicked up the horror just a notch.

As a whole, I would say that V/H/S accomplished what it wanted to do.  It took the “found footage” aspect and raised the bar by trying something different.  When it worked, it worked well. When it didn’t, you were yawning during a ridiculous chase scene in the woods (I’m looking at you ‘Tuesday The 17th‘). Had it taken it’s three best short stories and made the set up story with the 3 guys looking for the VHS tape better, this could have been close to a masterpiece.  But as it stands, it’s an enjoyable horror anthology just in time for Halloween that you and your friends can enjoy while eating candy corn and counting how many boobs are on screen.  In the end, V/H/S took a risk and had more hits than misses, so check it out on VOD or in theaters October 5th! 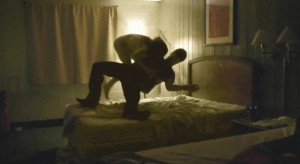