But something in my gore filled gut tells me that You’re Next will be something special. I know, I know – I thought the same about V/H/S before I saw it.  But keep your mind open with me and just go with it.

A few weeks back, it was finally announced that You’re Next was picked up by Lionsgate for distribution and will be released sometime in 2013.  And apparently, there was a bidding war which is always a good sign, right? No trailer yet though.  Just a few pics and the 4 positive reviews that are up at Rotten Tomatoes.  That’s good enough for me to start salivating at the mouth for some good horror! 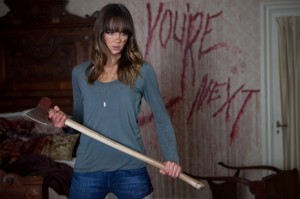 *paul bunyan ain’t got shit on me!*

Now for the cast which includes one of my genre faves, A.J. Bowden (The Signal, House Of The Devil) as well as director Ti West flexing his acting chops.  But let’s all welcome back scream queen Barbara Crampton (who will also appear in Rob Zombie’s The Lords Of Salem) and her nice rack to the world of cinema!  C’mon now, you know your mind immediately wandered to Re-Animator when you heard her name, even though the scene where she was strapped naked to the table while being licked by a decapitated head is slightly more disturbing than sexy :-/  All in all, You’re Next is shaping up to be a nice little indie surprise, so do your duty as a citizen of horror and support these crazy animal mask wearing psychos!