Here’s a new feature that I’ll be bringing you called You Ain’t A Killer.  It will focus on the moments in horror movies where the big reveal is unleashed upon us of who has been slicing and dicing poor bastards and bastardettes in the process.  And sometimes, we’re left with that dumb look on our face like we’re impersonating Lennie from Of Mice And Men.  First up – the somewhat entertaining, but never believable 90’s slasher, Urban Legend.  Now, I’m not going to review the movie, even though I will say that it did tickle my horror bone a few times, so mission accomplished on that.  What didn’t get accomplished was a believable killer.  And because of that, I have to say:  You ain’t a killer Rebecca Gayheart! 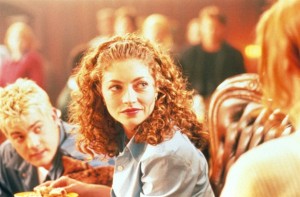 *do you really think my skin is flawless? awww – thanks! now I won’t kill you*

Ahhh yes.  The brutal nastiness of the Noxzema girl (Brenda Bates) is not believable for a second.

So let me get this straight.  Just because she’s “crazy”, we’re supposed to buy the fact that she has somewhat superhuman strength and can manhandle a guy, tie him up, then poor Drano down his throat in a beer bong?  Uh huh.  Ok – I get it now.  Her curly 90210 hair is supposed to distract us so we don’t think of the plot holes or absurdity of it all.

*what’d you say about my momma?*

Unfortunately for my female readers out there, this ongoing feature will most likely come off as sexist as I will mostly be spotlighting women characters.  I apologize in advance and will donate to the Woman Fund to make up for it. Having said that, I never bought Ms. Gayheart as a killer for a second when the big reveal came, even though she sports some pretty good crazy eyes. And sure, she had the motive (boyfriend killed…revenge…blah blah), but the last time I checked, a motive doesn’t give you muscles.  So the next time you see a curly haired, Noxzema model in a fur hooded winter coat – WATCH OUT!  She just might be a psychotic killer with a passion for urban legends and bad story lines.  Oh yeah – and watch out for Mr. Rogers too.  Apparently he was a Marine sniper and loved to shoot to kill.