For my loyal Dirty Horror readers out there, you know that I’ve already talked about my anticipation for Rob Zombie’s new voyage into horror, The Lords Of Salem.  If you’re not a loyal reader, then you can read that insightful feature here.  Well it has turned out to be a Happy Thursday for me indeed, because the trailer for this soon to be mind fuck of a movie has been released!  Check it out below and please make sure you haven’t done any hard drugs before watching:

Let’s all take that in for a minute, shall we?  The Lords Of Salem debuted recently at the TIFF and was applauded for it’s visual style and for the welcome detour from Mr. Zombie’s Halloween attempted flicks.

With the opera music being the main audio in the trailer (aside from a few “Satan, we are ready” chants), it definitely goes down the Stanley Kubrick road and gives us visuals that I honestly haven’t seen in a horror movie in a long time. 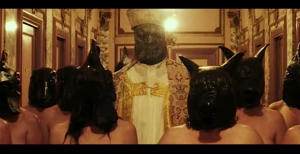 *forgive me Father, for I have no shirt*

But how will the plot (local radio DJs play a mysterious record backwards and conjure up evil witches and The Lords Of Salem) stack up to the eyegasms we’ll be having from the cinematography?  Therein lies the rub.  I have a sneaky suspicion that there might not be too much meat on the story bone, but I also have a feeling that it won’t matter much.  I see more than enough images to give me nightmares, along with Sherri Moon Zombie’s acting (prove me wrong this time Sherry and I’ll apologize…..prove me wrong). Well, Anchor Bay Films won the bidding war for The Lords Of Salem, so we can look for it to raise hell sometime in 2013.  Get you pentagrams and  sacrifices ready everybody! 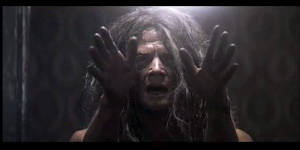 1 thought on “Rob Zombie’s Trailer For ‘The Lords Of Salem’ Has Been Unleashed!”