Well, it was the moment of truth.  Would Smiley become a new horror icon big enough to stand amongst the crowd of Freddy, Jason, and Michael?  Would Smiley become the villain that would haunt your dreams and make you think twice about turning on your computer?  Or would Smiley just turn out to be a steaming hot pile of dog sh*t that no one should watch, remember, or give two sh*ts about?  I’ll go with the latter…..

Hopes were slightly high for the new indie slasher, Smiley, purely based off of the killer’s mask alone. The stitched up eyes and a mouth with a perma-grin carved in seemed like a possible winner from the get go.  But then the actors and actresses open their mouths and the plot is revealed, sinking all hope faster than a jet ski with Kim Kardashian’s big ass on it.  This movie was so bad, that I’m not even going to waste my time or yours with any “plot” synopsis or critiques of the acting, cinematography, or gore fx.  It’s all just really bad. 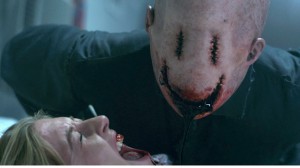 *sorry, I have a slight drooling problem – don’t be such a drama queen*

What I am going to do is give out some awards!  Yes it’s the first annual and last Smiley Awards!!!  So let’s begin:

The award for ‘Biggest Head On A No Name Actor‘ goes to:  the Dad of the little bratty girl at the beginning of the movie!  Seriously….that cranium is huge.

The award for ‘Worst Party In A Movie‘ goes to:  the first anonymous party in the movie!  The runner up would have to be the second party in the movie which is equally lame and bad, but at least it had some cool lighting effects and a pool.

The award for ‘Worst Weed Smoking’ goes to:  Caitlin Gerard!  Yes, what’s even more uncomfortable is her character Ashley’s “acting” of being stoned after she sparks up with her bestie Proxy (could have gotten her own award for her name) 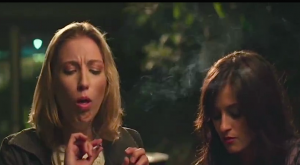 The award for ‘Worst Puking At A Party‘ goes to:  Caitlin Gerard!  You know you’re a truly gifted actress when you can’t even give a believable projectile heave when you’re called on to do it.

The award for ‘Worst Wake Up From A Nightmare‘ goes to:  Caitlin Gerard! Wow – someone’s going to have to help Caitlin home with all of her awards. She’s cleaning up!  There are a lot of ‘wake up from nightmare’ scenes in movies, so you know that she really had to nail it to bring home this one.

The award for ‘Worst Psychiatrist In A Movie‘ goes to:  Liza Weil!  Yes, no one gives out horrible advice better than Dr. Jenkins.  She’s head and shoulders above everybody else!

The award for ‘What The F*ck Is He Doing In This Movie?‘ goes to:  Keith David! Now every actor is entitled to a stinker now and then, but poor Keith is in the stinkiest of stinkers here 🙁   At least he gets a good zinger in at the end of the police interrogation scene. 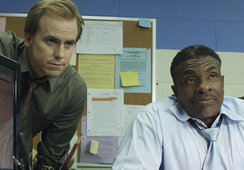 *I had a fight with Rowdy Roddy Piper once*

The award for ‘Worst Smashing Of A Laptop‘ goes to:  Caitlin Gerard!  If you can’t even smash a laptop convincingly, then you know you really are an awful actress.  But her bad acting is comedy gold for us, so it evens out!

The award for ‘Worst Intentional Jump Out Of A Window’ goes to:  Caitlin Gerard! Yes, poor Ashley jumps badly out of a window after realizing that there are numerous Smileys, who turn out to all be the people that she knows at school, including her bestie Proxy, and they were just all playing a cruel joke on Ashley to see how far they could push her.  Oops – did I just give away the ridiculous ending?  Spoiler alert! 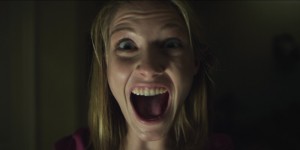 *perfect….now we can stick a sock in there*

Well, that concludes the first annual and last Smiley Awards ladies and gentlemen! Please get home safely and also remember to not go and support this horrible excuse for a slasher movie.  I love “bad” horror movies just as much as the next guy, but when there are no redeeming qualities, it’s kind of hard to justify putting down some money to see it.  Do yourself a favor though just for the lulz and download it or stream it online so you can see exactly how a horror movie should NOT be made.  And if a sequel of Smiley gets made, I think I’ll just jump out of a window myself.