Here we go again with the recurring feature, Give Me The Creeps!  I’ll tell you something from a horror movie that gives me the creeps and you can agree, disagree, or be boring and remain neutral.  This time its a bit of a surprise, because it’s honestly the only moment in the long running Friday The 13th franchise that ever actually gave me the willies – oops, I mean creeps – let’s stick with the theme here I guess.  I’m talking about the ending to the cheesy, but equally awesome 3D masterpiece, Friday The 13th Part 3. 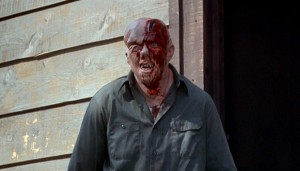 *the face only a vengeful murdering mother could love*

Now I’m being 100% serious when I say that nothing besides this ending to Friday The 13th Part 3 has ever scared me from this classic horror franchise, and that’s saying something.

Sure, I enjoyed pretty much every entry into the series, give or take a one or two, but the Friday The 13th movies for me were never about scares.  For me, they were about what creative ways Jason would find to take out the poor suckers in his way and cheering after he would dispose of those previously mentioned poor suckers.  Aside from this scene, I think the only thing that truly scared me in the long running Voorhees history, was maybe the ridiculous plot twist of Friday The 13th Part 5: A New Beginning. 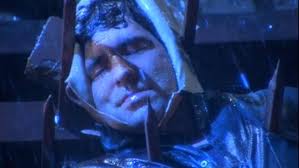 *zoinks! another villain unmasked by the scooby doo crew!*

In Friday The 13th Part 3, our heroine Chris Higgins (Dana Kimmell) thinks that after giving Jason an axe to the head in a rusty old barn, she’s finally rid of him and decides to take a serene boat ride on some calm waters with birds chirping in the background.  Ahhh – but unfortunately for her, Jason’s not dead and she sees him peeking through an upstairs window and then he proceeds to bust through the front door and come after her!  Either that or he just wants to take a relaxing dip in the lake – he did have a long couple of days after all.  This scene really did give me the creeps and still does to this day, mainly because of the helplessness that Chris feels and the fact that it takes place in broad daylight.  Because of that, the makeup effects on Jason really add to the creepiness.  Check it out below and let me know what you think:

Now of course it ends up being a “dream” sequence, which is kind of a bummer.  Jason’s worm faced Mom does leap out of the lake and take Chris in with her after she wakes up from the dream though, surprisingly with her head in tact btw, since she had it lopped off in the first movie.  But whatever, believability aside, I stand by this scene and it will forever be the one moment in the Friday The 13th franchise that gives me the creeps! 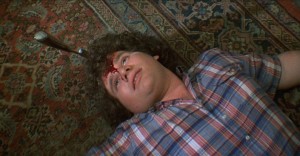 *looks like the thick jew fro is not indestructible after all*