It really takes a lot to make me want to go home after seeing a horror movie and check to make sure that no one’s in the house and maybe even sleep with an extra light on. When the trailers for the new creepy flick Sinister came out, I was prepared for it to be that movie.  So the question is – did I sleep tight last night, or did I have the covers pulled high up with my eyes darting back and forth at every little noise or movement in the house?

Well – yes and no would be the generic answer to that question.  Sinister was hitting on all cylinders with it’s creepy atmosphere and effective sound design, but something was missing from making it that “must see” horror film that I was hoping it to be.

Let’s start with the plot and go from there:  True crime novelist Ellison Oswalt (Ethan Hawke) moves his wife and two children into a house where four family members were murdered and hung from a backyard tree and the fifth member, a little girl, has gone missing.  Ellison wants to write a new book about the story, much to the chagrin of the town Sheriff.  He hides the “secret” of the house from his wife and children and begins getting set up to pen what he’s hoping will be his next masterpiece, putting him back into the spotlight.  A quick trip to the attic uncovers a mysterious box with some 8mm “home movies” (the real stars in Sinister btw) and a projector to watch them on, so Ellison quickly sets it up and begins the solo viewing party. 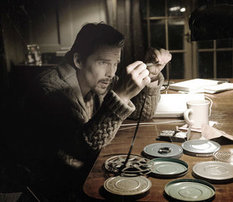 The first movie titled “Hanging Out” shows a family having fun, throwing a football around, and then the film cuts to a shot of the four family members being hung from a tree.  Horrified by what he saw and realizing that it’s the family from the house he is now living in, Ellison drinks some more booze and continues watching the other home movies.  All include different families and themes of how they were murdered.  The creepiest and most uneasy for me to watch was probably the “Pool Party”.  After finally seeing too much, he thinks about calling the police, then thinks again because he realizes this could be his big break back into the book business!  And of course that takes priority.

Ellison becomes obsessed with the murders and asks for assistance from the bumbling town Deputy.  After giving him the information for a religion college that used to be on Law And Order (Vincent D’Onofrio), Ellison comes to find out that these murders could have something to do with an ancient Pagan deity named Bughuul that is known as the eater of children’s souls.  In the middle of all of this, strange occurrences are happening in house and with his children, but is there really something supernatural and demonic going on, or is Ellison slowly slipping into insanity? 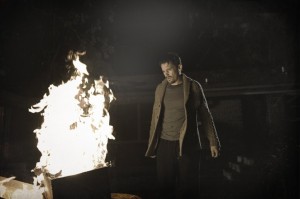 Sinister had a lot going for it.  Ethan Hawke played his role of struggling writer/demon hunter near perfectly and the supporting cast for the most part brought their B+ game. I didn’t quite buy the “marriage” between Ellision and Tracy (Juliet Rylance), but that was minor compared to my problems with the Deputy character (reminded me of Dewey from Scream).  Atmosphere wise – it was perfect.  The darkness (doesn’t anyone think of turning on a light btw?) added to the creep factor and as I mentioned before, the sound design really amplified some scenes (lawnmower anyone?).

My biggest problem with Sinister was that it got a little sloppy with wrapping everything up.  It’s pretty apparent what’s going on and why it’s going on.  I just wish they would have executed it a little better.  Sinister is definitely one of those movies you shouldn’t think too hard about, because it wears it’s “dumbness” proudly on it’s sleeve. What you’ll get is a perfect Halloween time horror movie that definitely has enough quality scares and creepy visuals to keep you grinning and maybe even reaching for that light switch in the middle of the night too.  Bring on Mr. Boogie 2: Electric Boogaloo! 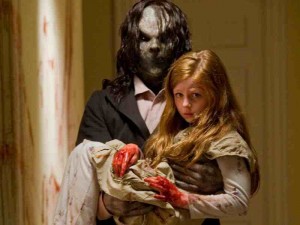