Look out Smiley, Stitches The Clown is coming to wipe that stupid ass grin off your face!  Now I could go into the fact again that Smiley was a complete piece of sh*t movie, took a fairly scary mask/premise, and squandered every opportunity it had to bring even the slightest redeeming quality to the average horror fan who submitted their eyes to watching it.  I even heard that some people were getting refunds from Amazon because it was just that bad.  So in the tradition of doing it for the lul’z, coming straight outta the UK is a new horror/comedy called Stitches. 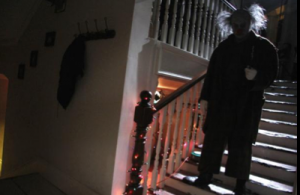 *who’s the asshole who invited the psychotic bushy haired murdering clown to the party?*

Already being hailed as a potential cult classic from Bloody Disgusting, it tells the tragic tale of Stitches The Clown who freakishly dies during a children’s birthday party after being tormented and ridiculed by all of the little tikes in attendance.  So what happens next?  Stitches comes back from the dead and takes revenge on the now ‘of age’ youngsters, that’s what!

And there’s good news for us in anticipation, because the trailer has popped up online.  Now there is a red band trailer as well, but I’ve watched it and feel it gives a little too much away.  It also has an annoying voice over attached that’s a bit distracting.  So do yourself a favor and check out the teaser trailer below, accompanied by the Cutting Crew 80’s classic “(Just Died) In Your Arms Tonight”:

Obviously coming with tongue firmly planted in cheek, Stitches looks like it will definitely deliver on the gore and the laughs.  Unlike that piece of sh*t Smiley, this appears to be a movie that knows it’s identity and has the potential to pay off and deliver the gore-filled goods!  Word is that Stitches is floating around online and has already been released overseas, but no word if or when it will ever get a proper US release.  If it does though, this looks like the perfect midnight movie to enjoy with a big drunken/stoned group.  So here’s to you Stitches, for temporarily taking that bad taste out of our mouths that Smiley put in there.  Btw – can you tell that I didn’t like Smiley? 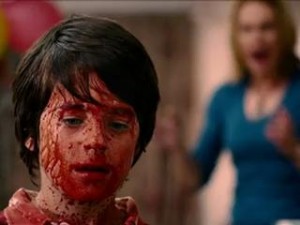