Contrary to horror belief, there is more to watch during the Halloween season than Michael Myers stalking a young, deep voiced Jamie Lee Curtis while she earns her Scream Queen title.  For me, one of the better flicks that captures that Halloween time feel and manages to also give you gore, boobs, and bad acting galore is 1988’s Night Of The Demons.

A personal 80’s horror favorite of mine, it’s about a group of high school kids who gather in an isolated mortuary for a costume party and manage to unlock a demon after performing a planned seance.  Oopsie Daisy! 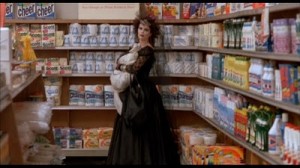 Where to begin with the iconic images and scenes in this one.  Let’s see:  Linnea Quigley’s ass, Linnea Quigley’s boobs, the Asian girl’s boobs, Angela’s dance to Bauhaus’ “Stigmata Martyr”, the ‘see it to believe it’ lipstick scene, the cranky old man and some razor blades, and the ‘oh no, they’re not going to get away….oh wait, they do!” ending.  Night Of The Demons not only captures the Halloween spirit (pun intended), but it fully captures what 80’s horror was all about and what more horror movies nowadays SHOULD be about.  With hearts in the right place, an ambitious remake was attempted in 2009, but that version of the demon infused Halloween party didn’t even come close to the campiness and enjoyability of the original. 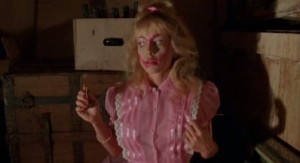 The nostalgia runs deep whenever I watch Night Of The Demons and it’s definitely required viewing around the time that the jack-o’-lantern is being carved.  It’s a movie that isn’t ashamed of letting it all hang out (yes, there is a subtle boob reference there) and that’s the disgusting beauty of it.  Not quite as recognizable as the mask of The Shape or that legendary John Carpenter theme music, Night Of The Demons still manages to bring that Halloween season feel, which lands it a place proudly next to the Michael Myers franchise on my DVD shelf for this time of the year! 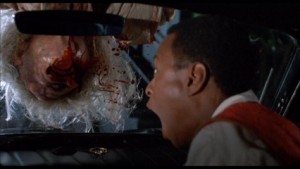 1 thought on “Required Viewing For Halloween: Night Of The Demons (1988)”