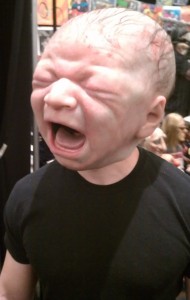 Normally done in April, Monsterpalooza spawned the Son Of Monsterpalooza for the first time due to popular demand and judging from the crowd, it will be a staple to have this event two times a year from now on!

It’s set up like your standard horror convention, but with more of a focus on the make-up and practical effects side.  There are numerous merchandise booths ranging from odd and creepy original artwork to classic memorabilia like that rare Flesh Eating Mothers poster you’ve always been looking for.  After hitting the swag spots, it was time to take a trip down B-movie memory lane with the many celebrities in attendance.  Hey look!  It’s the bartender from The Shining (Joe Turkel).  And look over there!  It’s Stephen Lack from Scanners and he’s not blowing anyone’s head up!  Yes, I joke, but it really is cool to see these horror actors who I grew up with and it had the nostalgia running hard through my veins. 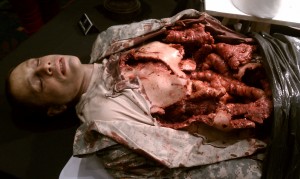 The main stars at this show though were the make-up and effects booths set up throughout the convention.  And maybe the most impressive inclusion was being able to watch a variety of make-up artists create something right before your very eyes, even if it took over 4 hours to complete.  Being able to see the finished product literally walking around was a huge treat!  Another treat was the costume contest, which gave the average spectator a chance to gawk and stare at some of the creations that people came up with including a really nice rendition of a bird attacked Tippi Hendren, a drooling zombie bride, and one of the most realistic Freddy Krueger’s I had ever seen. 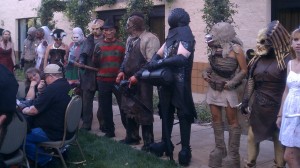 All in all, I was really entertained and impressed by Son Of Monsterpalooza. It did a great job of hitting and focusing on the world of make-up fx and also throwing in some of your favorite horror actors to boot.  Not sporting as big of names as the aforementioned Weekend Of Horrors, it still managed to keep me interested and have me stay for most of the day.  Being able to walk around with a beer didn’t hurt either. One criticism I would have would be that the main entryway where most of the celebrity booths were was a little cramped and tight, making hard to get through and appreciate at times.  That’s just one minor complaint though on a day where there were a lot of positives and overall, it’s a really impressive convention.  They’ve already announced the return of Monsterpalooza in April 2013 and I know I’ll be there, so if you’re in the Burbank area, you need to be there too! 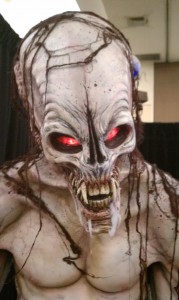 *Mitt Romney made an appearance!*