Well, as most of you who read this blog know, I really needed a good slasher flick to get the bad taste out of my mouth that is called Smiley.  I stumbled upon a poster for a new movie called Rites Of Spring and I was already intrigued based off of the retro feel that the poster gave me.  And boy do I love me some good retro horror! Unfortunately, the poster ended up being the best part about this mess of a movie and because of that, I would have to continue on with my journey to find the slasher movie that will take away that bad taste.

The main problem with Rites Of Spring is that it tries to do too much. Combining two story lines can be tricky, and that’s what we have here.  One story follows Rachel and Amy who stumble out of a bar, only to be chloroformed and dragged away by a creepy old farmer.  Now because of the opening of the movie, we are forewarned that every year on the first day of Spring, several girls disappear without a trace, and that doesn’t bode well for our gals.  They awaken tied up in a barn, one eventually stripped naked, and are constantly reminded by the creepy old farmer that he needs to make sure they are “clean”.  So he slices them a little so he can collect some blood, goes on his merry way, and begins the sacrifice so he can enjoy a bountiful amount of delicious yellow corn!  Yum! 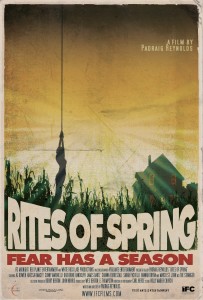 While these shenanigans are going on, we have the other story developing which involves four people who plan the kidnapping of a child from a wealthy businessman. Things go wrong, a woman is shot in the head, and instead of just kidnapping the child, they kidnap the older daughter as well and give strict orders to the father to get $2 million together and more strict orders to not call the cops!  As the two stories go back and forth, we learn that the two girls tied up in the barn are being sacrificed to some “thing” and we also learn from the kidnapping story that everyone may not be who they seem (suspense hit here).

*these sacrifices nowadays are so corny*

To put things into perspective, while watching Rites Of Spring, I literally got up and got myself a bowl of Honey Bunches Of Oats and went to the bathroom (not in that order). I did not pause the movie or stop it, so when I came back, I felt I didn’t miss a damn thing. Had the movie strictly focused on the whole “sacrificing” storyline, there may have been something fun to chew on there. Instead, we get some laughable acting (looks like Anessa Ramsey graduated from the Caitlin Gerard school of arts), a bad stand off scene that looks like it was lifted from an 80’s Cannon movie, and some of the worst noises ever heard from a girl trying to escape being tied up.  If you want to play a good drinking game btw, drink every time Rachel asks “Why are you doing this?!!”. One of the best moments in this movie is when the kidnapping “bad guy” literally tells her to shut up and she does……for the moment anyway. 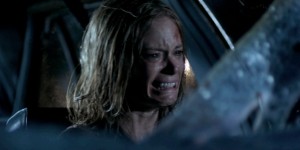 *look out Claire Daines, you have competition for your ugly crier crown*

I usually love AJ Bowen (The House Of The Devil, The Signal), but here he is wasted, playing the sympathetic character who wants to be the voice of reason.  Just doesn’t work for me and neither does the wealthy businessman Dad (James Bartz) – on second thought, he does work for me on a so bad it’s good level.  Even though I know I’m not supposed to take this movie seriously, I felt zero compassion for any of the characters and was gleefully waiting for the creature to tear their shit up.  Speaking of the creature, he is kind of cool when he shows up, complete with maggots crawling in and out of his face and a nifty sickle/axe as a weapon.  There are some decent practical gore effects to be seen too, but as a whole, it just feels like there are so many wasted opportunities to make something that could have been on the same level of 80’s horror cheesiness as Adam Green’s Hatchet.

Rites Of Spring is a huge frustration.  Somewhere hidden among the overzealous plot merging is a decent slasher film waiting to be let out.  The creature is a plus, but not a big enough plus to justify sitting through an entire movie full of bad soap opera/telenovaela moments.  I feel like I deserve a nice grilled piece of corn on the cob after “sacrificing” an hour and a half of my life to this crap.  Still better than Smiley though……so there’s that. 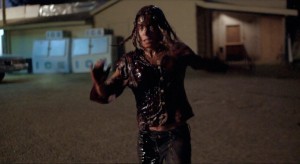