I can remember it like it was yesterday…..a young Indiana boy growing up in a small town just like John Cougar Mellencamp, finding ways to entertain myself, doing adventurous activities, and getting my hands dirty.  And what better way to get your hands dirty when you’re a 7 year old boy then to go digging for worms!  Oh how I loved finding worms in the dirt.  Capturing them and using them as bait when my Dad and I would go fishing to catch those giant bluegill that didn’t exist.  Nothing in the world could take away my joy of worm digging.  That was until I saw this: 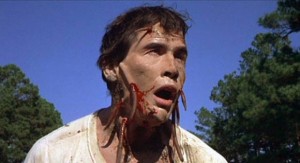 *just be straight with me….do I have something on my face?*

Sweet Jesus!  What in God’s name was a movie like this doing on at 2:00 in the afternoon on regular TV??!!  And of course after seeing this, I couldn’t go worm digging again.  What if they jumped up on my face and starting eating me?  I’d be helpless because they move so fast and would definitely be opening a big can of worms by chancing it.  That my friends and enemies is when the 1976, PG rated, killer worm movie Squirm gave me the creeps.

Yes, you read correctly.  This movie was rated PG.  And ole’ worm face up there wasn’t the only disturbing scene in it.  Taking a cue from old 50’s horror where every kind of bug or animal could mutate into a killing machine, Squirm told the story of a massive storm that caused power lines to fall on the ground, sending electricity through the ground and sending blood thirsty worms to the surface to wreak havoc on a small town.  Much like Night Of The Lepus or even Food Of The Gods, it’s pretty absurd, but in that endearing kind of way. 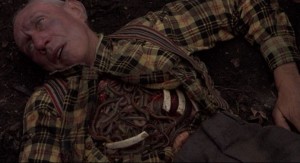 But back to the matter at hand and that matter is how bad Squirm screwed me up as a child.  Certain images stick with you and leave an impression, and that’s exactly what happened here.  I never touched a worm again.  I was even scared of gummy worms in my later life, but they’re delicious so I’m more forgiving with them.  If your motive Squirm was to scar a young worm befriending boy and deter him from ever befriending a worm again, then congratulations, you succeeded!  If that wasn’t your motive, well then it’s really a moot point because Squirm, you really gave me the creeps! 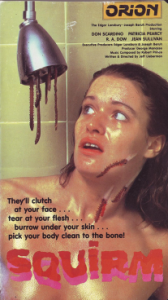