Ok kids.  It’s almost that time of the year again, where you have to leave Santa some cookies and maybe a carrot or two for his reindeer on Christmas Eve night.  Because if you don’t, Santa will shock you with a cattle prod and then skewer you like a shish kabob.  And that lovely mental image of course sets up my review for the new killer Santa movie, Silent Night.  A loose remake of the 1984 heavily protested horror cheesefest, Silent Night Deadly Night, this new take offers up the holiday horror goods, but does it offer up a decent storyline too?

I know what you’re thinking.  Why do you need a solid storyline when you have blood and boobs galore gracing your tv screen?  Good point.  But let’s touch on the story for a moment, shall we?  It’s Christmas time in Hollis, Queens….oops – wrong story.  It’s Christmas time in Cryer, Wisconsin.  The town is gearing up for it’s annual Santa costume contest and parade, but unfortunately, there’s a deranged St. Nick running around chopping up the townsfolk.  It’s up to the local police department, lead by Aubrey (Jamie King) and Sheriff Cooper (Malcolm McDowell) to save Christmas and take this sick Santa out!  Aubrey is a little shaky, with this being the first Christmas she’s spent without her husband.  And Sheriff Cooper feels he’s always been destined to solve big crimes and uses chalk boards to assist in the solving of course.

*what? this isn’t the My Bloody Valentine sequel?*

Directed by Steven C. Miller, Silent Night hits all of the right horror notes, even if the story is a bit ridiculous and the payoff at the end doesn’t really pay off.  Let’s talk about what does pay off though.  Jamie King throws on her scream queen dress again (even though she wears a cop uniform here) and does what she can with her role as the emotionally unstable cop trying to track down a murderous Santa.  And Malcolm McDowell shows us once again why he’s one of the best chewers of scenery ever.  He’s got some great one liners here, and you can’t help but laugh as he plays Mr. Detective, especially when you, the viewer, knows he’s wrong with every assumption he has.  But let’s talk about the real star of the movie though.  Santa!  Yay! 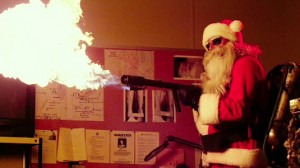 *who you gonna call?*

Santa isn’t too jolly here.  In fact, he’s pretty pissed off.  His kills are mean spirited and brutal, just the way us horror fans like them!  No one is safe here as Santa spreads his version of Yuletide cheer throughout the town, checking off his naughty list and disposing of bratty kids, sleazy porn photographers, and even a pervy priest.  But it’s not just about who he’s taking out, it’s about how he’s doing it!  Santa has a lot of tricks up his furry sleave.  The woodchipper will most likely be everyone’s top kill, but my favorite “oh shit!” moment came in the form of an ax to the head.  And for the most part, the gore and fx are of the practical sense, which only helps the horror cause. Some nifty homages to previous Silent Night, Deadly Night films are here as well, but I won’t spoil them for you.  That would be naughty, and I’m trying to be nice here.

Overall, Silent Night stuffed my stocking with enough goodies (last Xmas pun I’ll use – I promise) and definitely enabled me to have my perma-horror grin on for most of the 90 minute runtime.  Where the story lacked, it made up for with the gratuitous gore and overall tongue-in-cheek performances from the main players involved (specifically McDowell).  You can tell that Steven Miller and screenwriter Jayson Rothwell didn’t want to do a straight remake (which I applaud), but still wanted to give the horror audience enough of an homage to the 1984 original to keep them happy.  I’m not sure that Silent Night, Deadly Night really needed to be “remade”, but I’m not mad at them for trying and the finished product is more of a treat than a trick.  Oops – I’m getting my holidays mixed up :-/  Naughty!  Punish! 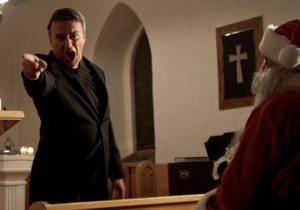 *get out of here you non-genuflecting son of a bitch!*