Back in 2009, I was hit with a pleasant surprise called The Collector.  Not groundbreaking horror by any means, but Marcus Dunstan’s directorial debut about a heist gone terribly wrong thanks to a demented entomologist who likes to set booby traps, rubbed me the right way and I was actually moderately excited to see the sequel, The Collection.  Now the time has passed and I have seen it, and I’m here to tell you if it lived up to that moderate excitement I had going into it.

Much like the Saw franchise, you aren’t really interested in something called a plot when you delve into the mind of The Collector.  There is a plot though, and it goes a little something like this:  Picking up directly where the first film left off, we are introduced to Elena (Emma Fitzpatrick) who is still distraught over her mother dying and has a father who played Shooter McGavin in Happy Gilmore.  Thinking her boyfriend is preoccupied for the night, she is persuaded to go to a secret password rave party with a couple of friends.  While they’re dancing to some shitty techno music, she discovers her boyfriend cheating on her and runs off crying after giving him a sweet punch to the nose.  The room she ends up in has a large red trunk, which she opens of course, and meets our hero from the first movie, Arkin (Josh Stewart), who was nabbed by The Collector at the end of the first movie.  Unfortunately, because the trunk was opened, it sets off a nasty little trap which I’ll talk about later, and in the end Elena is taken by The Collector while Arkin escapes out of a window. 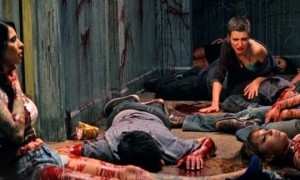 *is this the line for the bathroom?*

After escaping, Arkin realizes that The Collector holds a grudge and isn’t going to let him off that easy.  Meanwhile on the other side of town, Elena’s father (Christopher McDonald) is desperate to get his daughter back and blackmails Arkin to help since he’s the only one that has survived and knows where The Collector’s lair is.  So, accompanied by a team of special-ops type folk, Arkin heads back to into the abandoned hotel that our villain calls home.

Ok – now let’s get the acting critiques out of the way so we can move on.  Josh Stewart (Arkin) replays his role and does it well.  He has a subtle badass quality about him, and when he’s forced to throw down, he doesn’t hold back. Emma Fitzpatrick (Elena) does her best with the whole “female in distress” role and I have to say, I wasn’t as annoyed by her as I thought I would be.  The rest of the players are pretty much useless and provide some fairly bad dialogue, but it’s all forgotten when they’re disposed of in nasty ways by The Collector. 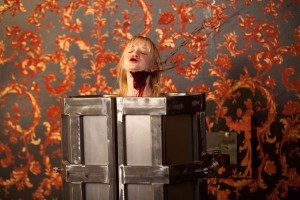 Since The Collector and this sequel definitely have some Saw-esque qualities, let me steal a line and just say that “oh yes….there will blood”.  The Collector is one pissed of dude this time around and I gather that it has a lot to do with the fact that people are intruding on his stomping grounds.  Doesn’t really explain the gratuitous opening sequence, but whatever.  It’s a gorehound’s dream and the slicing and dicing effects are pretty impressive.  The descending elevator lift on top of some unlucky ravers is another highlight as well, so if gore is on your menu, you definitely won’t go hungry here!

There are quite of few “Oh Shit!” moments in this movie and and quite a few “What The Fuck?” moments too to balance it out.  Some things I learned while watching The Collection were:

–  The Collector must have hit the gym hard in the time between the two movies.

–  Logic has to be completely thrown out the window when watching this sequel.

–  The arm break scene actually almost made me scream out like a girl.

–  The Collector should have had pet tigers instead of dogs. 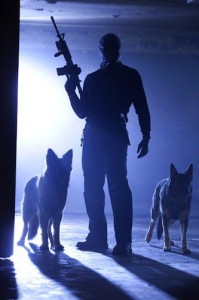 The Collection gave me pretty much everything that I was expecting.  A thin plot, lots of nasty kills, and an ending that was extremely satisfying and one of the best endings in a horror movie that I’ve seen in a long time.  Very interested to see if there will be a third entry and where they’ll take it.  Being that the Saw franchise is pretty much done (fingers crossed), I wouldn’t mind if they ramped up The Collector series and kept it going.  This sequel improved on the first, so my hopes are that they would take it even further if anymore sequels are to be made.  Btw – if you want to hear a good discussion about The Collection, head on over to the guys at Get Out The Room and listen to their podcast HERE.