Agoraphobia (an extreme fear of crowded spaces or enclosed public spaces) is probably the one phobia that I would never want to experience, except for cibophobia (fear of food) of course.  The former takes center stage in first time director Ciaran Foy’s supernatural thriller, Citadel, a slow build, white knuckle ride that was born from an actual experience that Foy had as a teenager.  So the question I’m here to answer for you, the loyal Dirty Horror reader, is whether or not his first time directorial effort that’s been getting praise around the horror world, is really worth the praise it’s getting.  Step inside and find out……

The plot is fairly simple, if not a little complicated at times.  Tommy Cowley (Aneurin Barnard) witnesses his pregnant wife be attacked by three mysterious hooded “kids” in their apartment high-rise who slash and assault her before sticking a syringe into her belly.  After inducing labor at the hospital, Tommy now has a baby daughter while his wife fights for her life.  Because of the trauma, he develops a serious case of agoraphobia and is severely frightened to leave his house and move around town with his new child.  It’s here where the plot and acting shine, as we’re inserted into the shoes of Tommy and really feel his pain and fear. 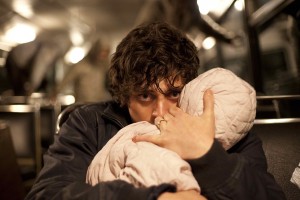 Now where’s the horror aspect at you ask?  Well, we still have the mystery of the origin of the hooded children and why they attacked his wife.  Tommy encounters a helpful nurse (Wunmi Mosaku) and a stern warnful priest (James Cosmo) who are definitely on opposite ends of the spectrum when it comes to an explanation to these children.  The priest is convinced there’s more to them that appears and our good natured nurse thinks that they’re just kids who grew up on the wrong side of the tracks and need a hug.  More or less, the priest ends up being right.  Which is when the supernatural and horror elements take over. 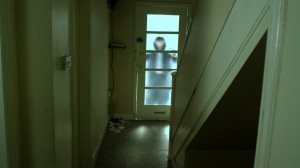 Very reminiscent of David Cronenberg’s 1979 creepy kid flick, The Brood, this movie sets the ominous mood right away and ratchets up the tension towards the end, just before it borderlines on getting boring.  Citadel doesn’t boast a lot of actors, but those who are involved all give believable and effective performances especially Aneurin Barnard and James Cosmo.  What makes the story more involving is when you know that, like I mentioned previously, that the director had an experience when he was 18 years old where he was mugged and assaulted by a gang of children and even threatened with a dirty syringe.  So he took that encounter, put a supernatural/horror spin on it, and presto:  Citadel was conceived. 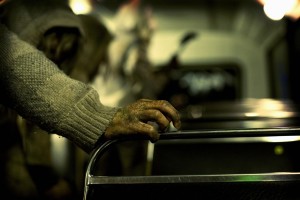 Fear plays a huge role in the plot and outcome of Citadel and you will be feeling a bit uneasy and jittery during certain scenes, which is a testament to the directing and effective use of lighting, or lack thereof here.  But speaking of the outcome, I was a little let down by the ending and felt it could have been stronger and tied up more cohesively.  Citadel is one of the movies, especially because of they hype, that will divide those who choose to watch it.  I didn’t love it, but it did keep me interested, so that’s always a good sign right?  And hats off (even though I don’t wear hats) to director Ciaran Foy for this being his first time in the director’s chair.  I look forward to whatever he has on his plate for the future, especially if it’s horror related.  The big question that looms over our heads is: was Citadel good enough to make my year-end “best of” list? Stay tuned to find out……