Well, that was something wasn’t it?  I seriously think I have to steer clear of anymore pics, clips, or trailers for this one though, because I feel like I’m almost seeing TOO much.  Are they blowing their load too fast?  Does it seem somewhat desperate?  Or will this re-imaging of Evil Dead really be that amazing and are they just trying to prepare us for the onslaught of awesomeness that’s about to come on April 12th?  Fun fact btw:  The original Evil Dead was released on April 15th, 1983.  Which would make this upcoming remake’s release date almost 30 years to the day.  Coincidence?  Probably not. A little over 3 months away folks – and we’ll either be singing praises to the horror gods, or we’ll be let down once again by trailer trickery.  I’m putting my money on the former. 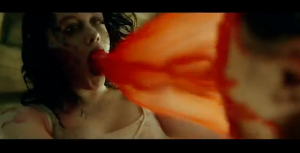 *sorry – I tend to get motion sickness*