Do you like drugs?  Good.  Then take some before you take on the journey that is John Dies At The End.  You’ll thank me later.  I wish I had taken some – instead I ate a bowl of Fruit Loops.  Fitting cereal to eat during the viewing I guess though.  Anyway, this mind-fuck of a film comes from Don Coscarelli, the man who gave us the Phantasm franchise, Bubba Ho-Tep, and of course, The Beastmaster.  Based off of the novel of the same name, it’s a confusing, but sometimes amusing, slice of what it’s like to exist in an alternate universe. The question is:  does it have enough tricks up it’s sleeve and in it’s bag to keep you invested in the 99 minute runtime?

Let’s start with the story and I’ll do my best to condense it so I don’t confuse you or myself too much.  We first meet David (Chase Williamson) as he’s beheading a zombie and giving us some snappy one liners in the process. Right away, we realize that David isn’t like everyone else, and we also realize that the story is going to be told from his point of view.  Enter in Paul Giamatti as Arnie Blondestone, a reporter that is ready to take David’s story and share it with the world.  But is he who he seems?  Does David really have the ability to see beings from other dimensions? Did I really just see a penis door handle? Oops – got ahead of myself.  Anyway, David tries to convince Arnie by telling a story from the night before where him and his best friend John (Rob Mayes), went to a distress call from a girl who said her dead boyfriend was harassing her. While at her house, the guys notice that they’re both seeing different versions of her, making her imaginary, and thus causing her to turn into a bunch of snakes and then unleash a monster made of different cuts of delicious meats. Still on board?

*stop smiling – you’re creeping me out*

The film from there on is mostly based on flashbacks and David tells Arnie about how everything started two years ago on a night when John’s band was playing at an outdoor party (they do a great song called Cannibal Holocaust btw).  It’s there that David meets the other supporting players:  his friend Fred, wannabe thug Justin, and the girl of the group, Amy.  There is also a dog that belongs to Amy that has bitten a Jamaican guy named Robert Marley at the party and can’t be found.  David befriends Mr. Marley who proceeds show off his magic skills, but also seems to know a lot about David’s past and prophesizes his future as well.  David gets spooked and bolts, the dog turns back up, and it never leaves his side from here on out. 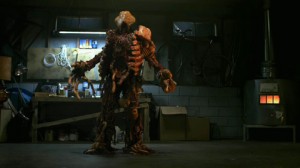 *I’ll get the grill ready*

Jesus.  My brain hurts.  Let’s push on quickly though.  David gets a frantic call from John telling him to come over, to which David does and finds John in a delusional state.  It’s told to us that it’s all because of a syringe containing a black liquid called “soy sauce” that was given to John from Robert Marley at the party.  John is obviously still confused, until he accidentally sticks himself in the leg with the syringe and immediately begins having hallucinations.  It’s after that when we really understand just what the “soy sauce” does and what David or anyone else is capable of if they use it.  And that ladies and gentlemen, is the last thing I’m going to tell you about the plot.  Trust me.  It only gets weirder and more confusing, so I would rather you take that ride for yourself. 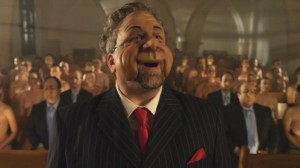 *the nice suit is a good distraction from your mask*

Let’s talk about the acting.  The always reliable Paul Giamatti is solid once again here as the skeptical Arnie, and even serves as Executive Producer for the film.  Chase Williamson did a pretty good job as our main character, David, and really shines when he’s paired with Rob Mayes (John) onscreen.  I almost wished that the movie had just focused more on those two kicking some otherworldly ass for the majority of the time.  Angus Scrimm (Phantasm) delivers a fun little cameo as does Daniel Roebuck as the creepy mask-faced Largeman (seen above).  The writing is snappy and made me laugh more than a few times, but I felt that it was almost too clever for it’s own good.  Now, I haven’t read the book and I’m sure as in most cases, the book is better than the movie and explains more.  But I’m reviewing the movie version, so I had to knock it a little just because it was a little too out there at times.  And trust me, I love weird shit, but when I’m watching a movie, I need to have some kind of cohesive narrative to bring everything together. 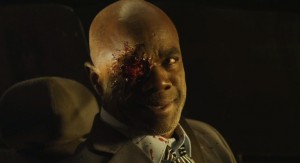 *would a monocle be a bad look for me?*

I’m a big fan of Phantasm and Bubba Ho-Tep, so I was pleased as punch to Don Coscarelli back behind the camera.  There are some great shots here and for the most part, the FX hold up (love the exploding heads), although there is some dodgy CGI that I could have done without.  When it was all said and done and I took everything in, John Dies At The End took me on a funky little trip that I enjoyed for most of the time, and all questionable plot holes and transitions aside, I would definitely recommend at least one viewing.  It does make me want to read the source material and see just what they could have improved on when it came to the story though.  Nonetheless, John Dies At The End the movie was weird, wacky, uneven, confusing, and above all: entertaining. That’s all we can ask for from a movie experience, right?