Now I’ve made a few posts about this Texas Chainsaw 3D movie, and most of them, ok – all of them, have not been too kind.  So now that I’ve finally laid my eyes upon it, would I have to sit down and eat a delicious crow for dinner tonight?  Or would I be able to jump and up and down and do my “I told you so!” dance that nobody really would want to see?  Well…….look who has their dancing shoes on!

Texas Chainsaw 3D was everything that I thought it would be.  Total shit.  A few good kills here and there, but overall:  total shit.  It may seem like I’m being a bit too harsh, but it boggles my mind that those involved couldn’t come up with something better than this.  Not only that, but how is this franchise one of those franchise’s that just can’t seem to get sequels right?  You have a menacing, big ass hillbilly, chainsaw wielding killer in Leatherface – and you just don’t have any idea what to do with him.  Now I’ll admit that I did kind of dig the Platinum Dunes 2003 “remake” for it’s brutality and it had me on the edge of my seat more than once, but this current TCM update was your standard direct to DVD fare and then got even more ridiculous with it’s laugh out loud plot “twist”.

Now if you feel the need to continue to read my review, be warned.  I’m about to spoil the shit out of it for you.  So without further adieu:  SPOILER WARNING!

The movie starts out with good intentions as a bit of a homage to the 1974 original classic, showing key scenes from that film, but then inserting a noticeable addition of Bill Moseley as the Drayton Sawyer character.  Whatever.  We get past that and it picks up with Sheriff Hooper and his back up arriving at the Sawyer house, asking for the family to give up Leatherface peacefully for the crimes he’s committed.  In drives Mayor Hartman and a bunch of pissed off rednecks, ready to dish out their own brand of justice.  Before you know it, they disobey the Sheriff’s orders to stand down, and unload bullets onto the Sawyer family killing everyone, except for a baby.  And of course we don’t see Leatherface actually die.  Flash forward to present day (even though that doesn’t make sense considering the baby would be in her 30’s), and we see that a family has raised the baby and her name is Heather (Alexandra Daddario).  Oh – and surprise, surprise:  her profession involves meat cutting and she makes art out of chicken bones.  Subtle huh?

*turn around – you’re aiming that gun in the wrong direction*

– Leatherface has been living in the basement of the mansion Heather is about to inherit.  He looks like he’s been keeping himself well fed though.  I was kind of hoping for his pad to look more like Greg Brady’s from the Brady Bunch when he got his own room.  Lava lamps were nowhere to be found though.

–  The carnival scene is disappointing.  I had high hopes that Leatherface was going to just run through and start chopping people up, but instead he chases Heather and watches her take a ride on the ferris wheel.  All of her friends are presumed dead now (this was all following an unintentionally hilarious scene where Leatherface slices off some tires and watches the car go off a cliff), and she runs to the nearest police station.

–  While in the police station Heather opens some evidence folders that she shouldn’t and learns that she is indeed originally part of the Sawyer family and Leatherface is her cousin!  She also learns that the Mayor and townsfolk, murdered her family and she starts to have conflicting feelings, as showcased in one of many ridiculous scenes.  At the same time, a lone cop (of course, because given the seriousness of Heather’s accusations about what happened at the mansion, you send just one cop in) goes through the house and follows what might be the longest blood trail in a movie ever.  And yeah, he dies, but not before he accidentally shoots Heather’s slut friend in the head in an homage freezer scene from the original TCM.

–  Leatherface gets his revenge on the townsfolk who murdered his family, with Heather’s help of course.  Naturally, the Sheriff shows up and let’s Leatherface go, because he feels sorry for him.  Heather finally opens the letter that her grandmother had written her about the inheritance and finds out that if she just would have read it to begin with, she would have known that Leatherface was shacked up in the basement and she was supposed to take care of him if she wanted the inheritance. 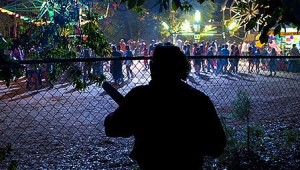 *ooooh – I hope they have the Tilt-A-Whirl!*

So the gist of Texas Chainsaw 3D is that we’re supposed to feel sorry for Leatherface.  Are you shitting me?  I don’t want to feel sorry for Leatherface.  I want to see Leatherface tear some shit up and be as brutal as possible while doing it.  I’ve read that some people have said that this movie does something different with the story, so we should applaud it for that.  Bullshit.  You don’t have to put some sappy side story in of how he just needs to be loved to reinvent the game of TCM.  That’s why I dug the 2003 remake.  Because it was bare bones, balls to the wall, and it knew it. 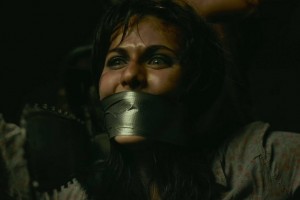 *if only all of the actors had tape over their mouths*

The acting throughout is pretty wooden, but it wasn’t the worst part for me.  The worst part for me was the story.  But the one bright spot I can touch on were the kills.  The guy sawed in half was pretty enjoyable and there were a few other kills that had me pumping my fist.  But that was about it for the highlights.  Cameos are cool and all, but when they’re in a shit movie, they really don’t amount to much.  Texas Chainsaw 3D was smart enough to throw in the song “Jimmy Crack Corn” during a scene with Leatherface.  It’s fitting considering that if there’s any legitimate sequel talk, I just don’t care.