Remember TV dinners?  I should clarify I guess because they still exist today technically.  Remember TV dinners from the 80’s?  Although they were developed in the 50’s, they were a booming commodity in the 80’s and I had my fair share of them with the overly processed turkey and bland corn being my favorite.  Almost as exciting as doing Jiffy Pop on the stove and watching the aluminum rise as you shook it back and forth, the TV dinner had equal and anticipation factor as you pulled back the plastic wrap covering, trying not to burn your fingers off.  A huge part of my childhood  and I enjoyed every delicious/disgusting morsel of goodness that came from it.  That is until ZZ Top fucked that all up.

MTV was starting to be all the rage in 1983 and ZZ Top was one of the first groups to grace the cable channel.  I was only 7 years old, but I think I may have gotten my first boner while watching their “Legs” video (TMI?).  I was down with the bearded duo and the non-bearded drummer to a certain degree, until they ruined my fascination with TV dinners in one fail swoop with their video for the aptly titled song, “TV Dinners”.  It was the 80’s, so people could make songs and videos about things like that.  I remember my excitement when I first saw the video beginning – hoping that I was about to see another scantily clad woman appear, possibly popping out of a giant TV dinner much like a stripper jumps out of a giant birthday cake.  Unfortunately, I did not get that. Instead I got frightening images and bad special effects that have haunted me for years.  Proceed watching below if you dare:

How they hell could I eat another TV dinner after watching that?!  I would forever fear that a badly created claymation alien looking creature could be living under that aluminum foil and swimming in my turkey gravy.  And what’s worse is that he would want to steal my potato chips and drink my soda!  He does like watching ZZ Top though, so I guess I could bond with him over that, but when I was 7, I wasn’t thinking about that.  I was busy getting boners over women in MTV videos.  And what the hell was a Quija board doing there? What kind of devil shit was that Rick Springfield lookalike into??  Never touched another TV dinner in my life after this, so thank you ZZ Top for ruining a kid’s life, but in retrospect, maybe I was better off.  Who would eat a TV dinner with a rodent being used as it’s selling point? 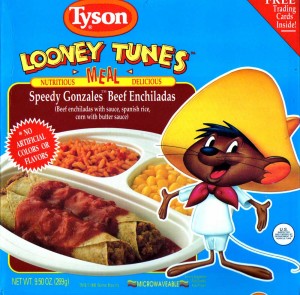 You’re starting to look better to me now awful claymation monster man.  Let’s bury the hatchet and go grab a beer and you can tell me about all of your amazing groupie stories that I’m sure you have from the video set. 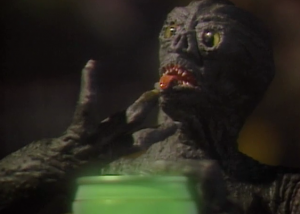 1 thought on “Give Me The Creeps: ZZ Top’s ‘TV Dinners’ Music Video”