Maggots.  They’re gross.  They’re disgusting.  And Geena Davis gave birth to one in a dream sequence from David Cronenberg’s version of The Fly.  But aside from that, the term “maggot” was never quite looked at as endearing. That was until the metal band that you love to hate, Slipknot, came out and bandmate/percussionist Clown pronounced that their fans be called the baby flies.  The point is that you most likely equate maggots with death and horror. And Slipknot is definitely deeply rooted in horror.  Which is why I’m giving them the spotlight, because aside from their music (which can be horror based as well), I have to commend and applaud anyone who has the opportunity to bring horror in any form to the mainstream masses.

It’s all about the mask.  Just ask Michael Myers.  Or Leatherface.  You can even ask Smiley if you want, but you probably shouldn’t.  And when it comes to Slipknot, the mask is synonymous with who they are.  You can thank Clown (M. Shawn Crahan) for the birth of their legendary face covers.  Whichever mask you’re looking at in the Slipknot lineup, you can’t help but picture it on the dome of some psycho with a sharp instrument stalking a fake breasted bimbo in a horror movie.  So horror filmmakers take note:  it wouldn’t be a bad idea to borrow a little inspiration from one of these bad boys below!

Now what’s one way that you can gauge just how popular something is when we’re talking about horror?  By Halloween masks of course!  Sorry, I don’t equate Halloween with slutty Raggedy Ann costumes.  I want my Halloween to be fucked up and scary.  Which is why it pleases me to see a plethora of Slipknot Halloween masks available around All Hallows Eve time and it pleases me even more to see that they’re almost always sold out.  Yep – business is booming in the Slipknot mask department, so buy one and scare the shit out of your wife or that old lady down the street that gives you pennies instead of Halloween candy. 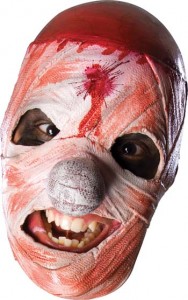 Horror-themed music videos have always drawn my interest, especially in my impressionable younger years.  Of course back then in the 80’s, Michael Jackson’s “Thriller” was the granddaddy of them all, but in the end, dancing zombies just didn’t get under my skin.  Now if we’re talking about Ozzy Osbourne’s “Bark At The Moon” or Rockwell’s “Somebody’s Watching Me” (fuck you creepy ass mailman), then we’re getting somewhere!

Go look up ‘Slipknot and Horror‘ on Youtube and see how many horror tribute videos pop up containing their music.  That’s just one indication of the horror/video combo related with them, but let’s get down to the real stuff shall we?  With their masks firmly in place, you wouldn’t expect anything less than a little horror when it came to their actual music videos.  So, with obvious inspiration from Stanley Kubrick’s The Shining, their first video to bring that horror vibe was “Spit It Out”:

Now what’s more demented than a young boy who enjoys cutting up some goat while eating Fruit Loops with dirty water?  Sorry, no Stanley Kubrick references here, but Slipknot’s video for “Left Behind”, from their album Iowa, still manages to hit that horror button hard:

No matter what side of the electric fence you stand on regarding Slipknot’s music, if you’re a horror fan, then I know what side you should be on if we’re talking about the impact that they have in the horror community.  We’ve talked about the overall image, the masks, and the videos.  I didn’t even get to touch on the fact that lead singer Corey Taylor and  M. Shawn Crahan have started their own horror film production company, Living Breathing Films, and Crahan has also released a morbid little polaroid photography book called The Apocalyptic Nightmare Journey.

Now before I get out of here, it would be a huge injustice if I didn’t mention the Slipknot stage show.  Like a psychotic musical circus, I can assure you that you haven’t experienced a concert until you’re experienced a Slipknot concert.  Don’t like their music?  I don’t care.  If you go to a Slipknot concert and don’t feel the energy and respect what they’re doing up on that stage, you can punch me in the face.  That’s pretty confident, eh?  To rest my case, I’ll leave you with a few clips of the band doing what they do best.  Respect the horror and RIP Paul Gray.