When I was a young boy in Indiana, I remember flushing an apple core down the toilet and watching in horror as the water rose up and almost flooded our bathroom.  My Dad being the sympathetic soul that he is, told me that if I ever did that again, The Boogeyman was gonna get me.  Well, of course I slept that night with the covers pulled up to my eyes, listening for every little noise that was coming from inside my room – specifically under my bed and in the closet.

The Boogeyman is synonymous with scaring the shit out of little children and terrorizing them into submissive behavior.  Around the world, there are different versions and tales of him (or her if you’re not sexist), with Latin America winning the prize for the most disturbing.  The Boogeyman there is known as the Sack Man and he steals children who misbehave, throws them in a large sack over his back, then eats them later.  Precious.  But the age old question surrounding The Boogeyman isn’t whether or not he’s a Burger King or McDonald’s kind of guy. It’s the question of why hasn’t there been a good horror movie made about him?

To be fair, technically Michael Myers was referred to as The Boogeyman by little Tommy Doyle in the original Halloween (1978).  But to me, that doesn’t count, because in the end, he was still Michael Myers – not The Boogeyman. Fast forward two years later to 1980, and we have the first movie actually titled, The Boogeyman.  Dripping all over with that early 80’s nostalgia, the movie centered around mirrors, shards of glass, and supernatural forces. There was technically a “Boogeyman”, but in the end, the movie just wasn’t that scary and will most likely be remembered for this scene below:

Wow.  That was pure awesomeness.  Let’s see it one more time!

Ok.  Gonna be hard to follow that up, but let’s continue on.  In 1982, a short story by Stephen King called ‘The Boogeyman‘ was developed into an equally short movie by the same name.  While the Stephen King written story was effective, the movie short was fairly forgettable.  We would then have to wait 23 years for the next incarnation of the elusive film version of The Boogeyman. And this is the best we could get in those 23 long years of waiting huh? 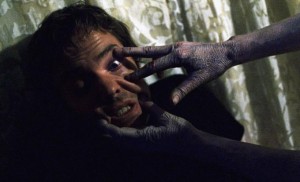 Yes, 2005 brought us Boogeyman.  Minus the “The”, this was a PG-13 crapfest that was released during a time of over-saturated PG-13 horror flicks and revolved around a guy who returned back home to face his childhood bedroom fears.  Yawn.  Somehow, this movie got the green light for two sequels too, which actually improved on the original, but still only are required viewing if you’re up late, channel surfing and happen to stop on the SyFy Channel. Boogeyman 2 should have definitely been called Boogeyman 2: Electric Boogeyloo though.  They really dropped the ball on that one.  But how depressing is this?  We wait 23 years in between Boogeyman themed movies, and this is what we’re given?  Come to think of it, the wrestler in the WWE who called himself ‘The Boogeyman’ was scarier than any of these shit movies. 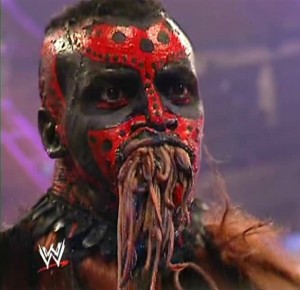 *I don’t prefer mine fried….takes away from the overall taste*

Not even joking, WWE’s version of The Boogeyman was the scariest version to date, and that’s both sad and awesome at the same time.  He snuck up on people, carried a big ass clock around so you knew your time was up when you saw him, had worms crawling out of his mouth that he promptly would spit all over his victim’s faces, and constantly ran around saying “I’m The Boogeyman….and I’m comin to getcha!“.  And why wasn’t this turned into a horror movie? 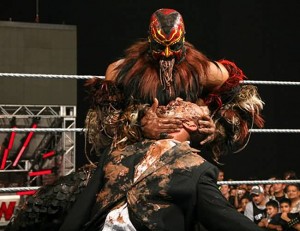 In conclusion, because I’m tired of talking about this, we need a be-all and end-all movie based on The Boogeyman.   I know it can be done.  We just need the right people to do it.  I’m looking at you Ti West.  But not you Wes Craven. Sorry….My Soul To Take was crap.  But anyway, the time for a definitive movie about The Boogeyman is now!  Let’s take it to the streets like they did in the 60’s and spread the word people!  Let’s raise our fists up high and pump them for no reason at all and scream to the heavens that we need a good Boogeyman movie!  Ah screw it.  Let’s just watch that Youtube clip again.

5 thoughts on “Can We Get A Good Movie Based On ‘The Boogeyman’ Please?”