Being that I’ve already done a previous Anticipation Alert post on You’re Next, I won’t bore you with my excitement that the movie is finally being released August 23rd.  And to ramp up the excitement even more, new posters have been released to promote the new release date and word is that the trailer finally premiered last night on Entertainment Tonight.  Really?  Entertainment Tonight?  Just my luck – I was watching the Bulls/Heat game last night instead, and decided to give Entertainment Tonight the night off.  Oh well.  Look out for the actual trailer to hit the web soon and I’ll definitely be covering it.  Here’s my favorite poster of the lot because I love scary sheep.  Wouldn’t be shocked if the killer sheep masks are running low this Halloween either. 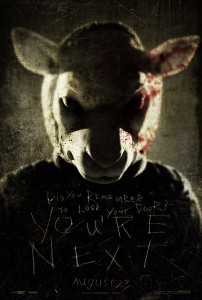 Good news!  The trailer has officially arrived…..starts out a bit ‘meh’, but then reallllly picks up to satisfy my previous anticipation.  Check it out below:

1 thought on “Holy Sheep! New Posters For ‘You’re Next’ Bring The Creepy”