Not apologetically, I can say that I liked House Of 1000 Corpses for the craziness that it was and I honestly loved the sequel, The Devil’s Rejects and felt it nailed the dirty retro vibe it was going for.  We’ll just forget about the Halloween movies for now though and move along to the present.  Basically, I was excited about The Lords Of Salem because it was giving Mr. Zombie a chance to give us something original again, and who doesn’t love a good horror movie about witches?  My expectations going in weren’t super high, but they were up there, and when I walked out of the theater, I think I exhaled about 4 times because I literally was deflated by what I had just watched.  And needless to say, that’s a big problem.

The plot revolves around Heidi (Sheri Moon Zombie) who is part of a radio DJ trio in the little town of Salem.  The same town of Salem that burned witches at the stake back in the 1692 and now those witches are looking for a way to exact their revenge.  So how do they do that?  Why they send a vinyl record to Heidi at the radio station in an old creepy box that has some equally creepy music on it and Heidi takes it home and plays it.  Interesting too because she seems to be the only who can get the record to play correctly, since her Jason Lee look-a-like co-worker/love interest (Jeff Daniel Phillips) can’t seem to get it to play.  Well, the record plays, it hypnotizes Heidi and other women throughout town who are listening, and the Heidi promptly starts seeing weird hallucinations like faceless doctors and midget monsters with non-midget umbilical cords.  From then on, it’s scene after scene trying to top itself with WTF moments, until the finale comes and you’re watching some faceless priests from earlier, stroking rubber dildos.  Yes, that really happens. 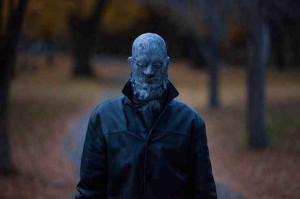 I get why people are saying that Rob Zombie was influenced by Kubrick, Argento, and Polanski in The Lords Of Salem.  But as Rob was saying in the Q&A after the movie, just because there’s a creepy hallway shot, people are automatically going to assume that it’s got influence from The Shining.  He went on to say that there has to be some other movie with a creepy hallway shot in it, insinuating that he wasn’t trying to ride Kubrick’s coattails.  Whether he was influenced or not, he knows how to film a creepy scene and bring out the atmosphere and that has always been his strong suit (the kitchen scene in Heidi’s apartment sticks out in this one).  All of his movies have looked spectacular, but his main problem in my eyes, lies in his ability to tell a story.  I’m always on board for some weird, nonsensical shit.  But it just didn’t work here for me and I found myself looking at my watch towards the end, instead of the actual movie up on the screen. 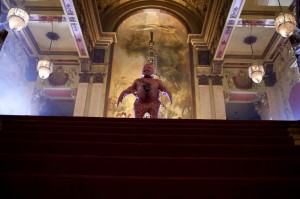 Even though the script was weak, there were some stand-out roles to witness.  Meg Foster (They Live) plays Margaret Morgan, the head Salem witch who is spearheading this whole revenge plot and she steals the show.  Also on the witch train getting the acting kudos are genre veterans Patricia Quinn, Judy Geeson, and Dee Wallace.  Now had The Lords Of Salem focused more on the witches and less on the person I’m about to talk about next, we would have been more on the right track.  And that brings me to Sheri Moon Zombie.  I’m not going to hate for the sake of hating.  I honestly think she cannot carry a movie and that was evident here.  When you have a hard time selling a cough to the audience, you know you’re in trouble.  I didn’t mind her as much in House Of 1000 Corpses and The Devil’s Rejects, but since those two movies, it’s really been downhill for me in regards to her acting.  If I’m not invested or able to believe the trials and tribulations of the lead, it’s almost impossible for me to care about the movie as a whole. 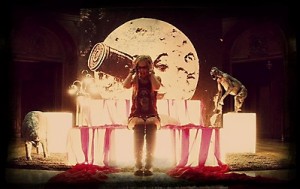 When I saw this movie at the Arclight in Hollywood and found out that Rob & Sheri would be doing a Q&A afterwards, I was pretty excited and was hoping to hear some great behind the scenes stories and really hear the passion from Rob about his film.  But not only did I not like the movie as much as I would have hoped, the Q&A just made everything crash down even harder.  I got the vibe that he didn’t really even want to make this movie.  Makeup and creature effects artist, Wayne Toth, was in attendance and it was said by Zombie that Wayne was the one who encouraged him to do the movie and revisit the script.  And in Zombie’s words “if you didn’t like the movie, you can blame that guy there.”  As the Q&A went on, it became evident that Rob Zombie didn’t get to make (once again) the movie that he wanted to make.  And it was also very evident that he is fed up with the movie industry, specifically when it comes to horror movies.

And I get it, because just as he’s frustrated with the industry, I’m frustrated that if The Lords Of Salem was indeed his last horror movie, he seemed to have phoned it in, whether intentional or not.  There were money problems.  And shooting problems.  And more money problems.  At least he was able to use real rats in the hallway scene (as confirmed with laughs at the Q&A).  As I stated at the beginning of this review, I am a Rob Zombie fan, so before anyone criticizes my review and says that I just didn’t get the movie, I’ll stop you right there.  I did get it.  And I get that it was different from anything he’s done and I do applaud him for that.  But in the end, I was left with a really bad taste in my mouth and it wasn’t the box of Goobers that I was munching on.  Frustration seems to be the key word here, because I know he can do better.  And I know that he can give us another original horror movie that can live up to the hype and take away the stink of this one.  Question seems to be, will he or won’t he?  I’m down if you are Rob…..