Alright!  There’s another Men In Black movie already coming out! Wait….what’s that?  There isn’t?  But then what the hell is this new trailer for a movie called R.I.P.D. all about?  It sure looks like a Men In Black film.  It even has the same snappy dialogue, but Will Smith and Tommy Lee Jones have been replaced with Jeff Bridges and Ryan Reynolds.  Something is afoot here. 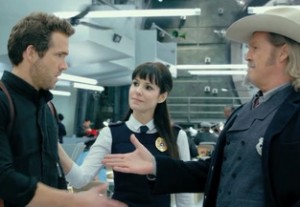 I love me some Jeff Bridges, but I don’t know that I can take a whole movie full of that accent he’s using.  And good news for CGI fans – there’s a lot of it! Hooray!  I’m not against ‘leave your brain at the door’ action movies at all, but this just reeks of desperation, and if I didn’t see Bridges and Reynolds in it, I would honestly think that it is some kind of Men In Black sequel or prequel.  I remember hearing about R.I.P.D. way back when it was being conceived, and my anticipation alert was somewhat piqued.  Then I saw the trailer and it took a nosedive.

If I want to see a good Buddy Cop movie about dead cops fighting the undead and supernatural, I’ll take my chances with watching 1988’s Dead Heat starring Joe Piscopo and Treat Williams.  Nobody delivers a funny one-liner like Joe Piscopo!  Well, actually, a lot of people do it better, but my standards are low right now after watching that R.I.P.D. trailer again.