This one has bothered me for a while now.  I remember the first time I saw Friday The 13th.  It wouldn’t be until it debuted on cable that I would get my first viewing, because I was only 4-years-old when it was released in theaters and that would have just been irresponsible of my parents to take me then.  So when the big reveal came about who the killer was, I think I paused for a minute…..and may have even thrown a “What the f*ck?” in there, which was wrong considering I was only about 7 or 8 when I saw it.  80’s movies were full of nudity and vulgarity, so I told my parents to deal with it.  But yeah, it didn’t take me long to come to the realization that:  You ain’t a killer Pamela Voorhees!

Spoiler alert for those of you living in captivity for the last 33 years.  Jason is not the killer in the original Friday The 13th.  His mother Pamela Voorhees is, and revenge is the reason why because camp counselors let her son drown when they should have been watching him.  They were off getting their freak on instead.  Cut ahead years later when the camp where Jason drowned is now being reopened, and Mrs. Voorhees is none too pleased.  Add to that that it’s Jason’s bday, and there’s no choice but to let the killings begin!  Oh, and kill she does.  With axes, arrows, knives…..all kinds of good stuff.  I know I’m supposed to throw logic out the window when watching most horror movies, but come on now.  How they hell is this 50-some-year-old woman manhandling these much younger and stronger kids? 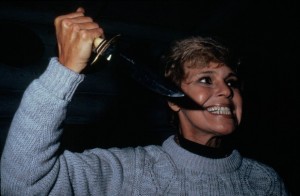 *check out my new veneers!*

I always thought they should have cut to a montage of what she did in her off time as she planned her revenge.  We could have seen her punching giant frozen meat slabs, lifting weights, and running through the water hand in hand with Apollo Creed.  Then maybe it would have been more believable that this woman could pull off something like she did.  Take that big ass sweater off Pam and show us those guns you’re working with!  Give us some proof for God’s sake that you were physically able to hold Kevin Bacon’s head and stab him through the throat with an arrow. 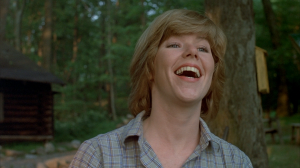 I know, I know.  Maybe I’m over thinking things.  Maybe I should just relax and enjoy Friday The 13th for the genre trailblazer that it is.  Or maybe I should stick to my guns and proclaim once again that Pamela Voorhees is not a killer! Ugh.  You want more proof before we leave here?  Check out this “limited edition” figure based on Mrs. Voorhees character and marvel at the fact that it looks just as ridiculous as the actual realization that she was a killer in the movie. 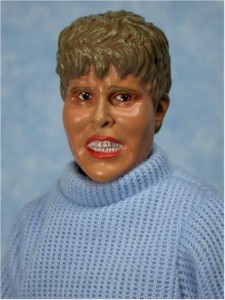 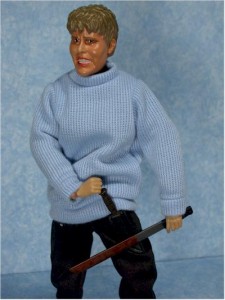 Wow.  Just wow.  I’m sure there are a few of these gems still available to add to your shitty horror action figure collection.  The upside to all of this of course is that Sackhead Jason was born (which I almost prefer to the hockey mask btw….almost) in the sequel, and all we had to see of Mrs. Voorhees was a decayed decapitated head from then on.  It’s the little things in life that can make you happy.