Ahhh teenage love.  We’ve all been there.  But in Jameson Hesse’s new novel, Whisper Of Crows, he gives the reader something much more than a standard teenage love story.  I love when a book can throw so many twists and turns at you, that you almost forget what kind of genre you’re reading, mainly because there are just so many layers.  That’s what Hesse does here, and he does it well, making the experience engrossing, as you flip frantically through the 358 written pages.

Our main character in the story is Kanaan James.  Seems that he is a bit misunderstood, and a loner at that.  Kanaan has a quiet obsession with a girl and childhood friend named Abigail, and he happens upon her one fateful day in the woods as she’s being sexually pleasured by the town bully, Kenny.  And this my friends would begin Kanaan’s decent into madness as Kenny and his bully friends would catch him and not only beat him up, but violate him as well in the worst way (involving possible splinters).

From then, Kanaan goes after the bully bunch to get Abigail back, and make sure she’s alright.  Only she isn’t alright.  Kanaan finds the car they were driving, demolished from a crash, and tries to pull Abigail out, in the meantime killing Kenny while he’s trapped in the car.  Abigail is non-responsive and the two head to an abandoned house and Kanaan attempts to revive her, and successfully does.  Only problem now is that Abigail has amnesia and this begins Kanaan’s web of lies as he tells her that they have been a couple for a while now and also that they’re on the run from the cops because she killed Kenny, the bully rapist.  Told you this wasn’t your standard love story. 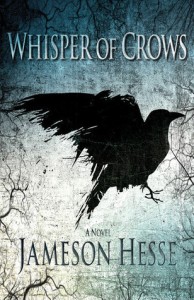 Where’s the horror you ask?  Well, from then on, Hesse pulls the reader into the twisted world of Kanaan James and things get extremely fucked up (pardon my French), which as a horror fan, I loved.  I don’t want to give too much away, but when Kanaan’s evil stepfather, Scar Face Joe, comes into the picture, the story really goes to another level.  You’re left asking yourself the whole time, what is real and what isn’t?  Are there supernatural forces involved?  Are a lot of these issues and problems just in Kanaan’s mind?  Did that decapitated head really come back alive and talk?  Yeah – things get gruesome and graphic, just how I like it!

Jameson Hesse seems to have a bit of Stephen King inside him, which is never a bad thing when you’re a horror writer.  The whole time I was reading Whisper Of Crows, I envisioned it as a movie.  The dialogue between the characters at times seemed a bit generic, taking me out of a scene occassionally.  But Hesse’s genuine gift for captivating the reader and going into great detail through his narration seems to be his strongpoint.  The book kept my interest, and I wanted to know what happened to Kanaan, and that’s a testament to the writer overall and his ability to engage the reader and tell a story.  I’m looking forward to seeing what Jameson Hesse can come up with next on the horror front, and from the way that Whisper Of Crows ended, it could be that we haven’t seen the last of Kanaan James.  And for me, that would be a good thing.