We’ve seen it all before.  An evil house, a possessed family member, a paranormal team who helps perform an exorcism.  But rarely do you get to see it done so well.  Welcome to the already hyped (and deservedly so) spooky flick, The Conjuring.  A movie that impressed me even more than I thought it would, but not just because it was downright scary and intense for most of the almost 2 hour runtime, but because it was smart.  Yes, you read that right.  A horror movie that is actually smart.  I think I just saw a pig fly by.

Director James Wan knows horror and he knows how to creep you the fuck out.  Mostly known for the groundbreaking twist of all twists flick, Saw, he also delivered the goods in 2007’s Dead Silence and in 2010 gave us the love it or hate haunted child experience, Insidious.  What he’s done here in my opinion with The Conjuring, is give us not only the best movie of his career so far, but also one of the best haunted house/possession movies EVER.  Yep, I said ever.  Well, actually I said EVER.  And to make things even better, The Conjuring is based off of a true story and real characters, making it more believable, although I’m sure just a smidgen has been embellished for the moviegoing public (wink, wink).

After a great creepy doll opening that establishes the husband/wife paranormal team of Ed and Lorraine Warren (Patrick Wilson & Vera Farmiga), we’re introduced to our main subject in the film, which is the Perron family as they’re moving into their new farmhouse home in 1971.  Carolyn and Roger Perron, along with their daughters, seem like the typical happy family who like to do typical happy family things such as play a game where one person is blindfolded and the others clap so they can find each other.  Seems a bit dangerous if you ask me, especially when doing it in a house with stairs, but whatever.  And speaking of stairs, a secret cellar is soon discovered and of course it has a bunch of old dusty furniture and an untuned piano covered in cobwebs.  That’s always a good sign, right? So is having a family dog that won’t step foot in the new house.  I think you can see where we’re going here. 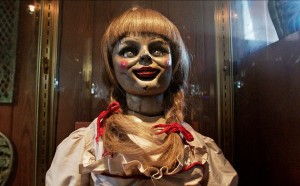 Aside from the clocks always stopping on the time of 3:07 in the morning, more strange occurrences are happening.  Bruises on Carolyn’s body at night, one of the daughters feeling a couple tugs on her leg while she sleeps, and another one sleepwalking and ramming her head into a vintage armoire.  Oh, and an elderly spirit in the house pouncing on the eldest sibling while freaking out everyone else in the process.  After all of that, you know who it’s time to call:  Ghostbust…..err…..Ed and Lorraine Warren!  And once they get a chance to peep the scene at the Perron house, they’re convinced that something has to be done ASAP, so they move in with their crew, set up a bunch of cameras throughout the house, and hope to get rid of the evil spirit.  The evil spirit that they now know is an vengeful witch lady who hung herself years ago after sacrificing her newborn child and then cursed anyone who ever moved onto her land again. 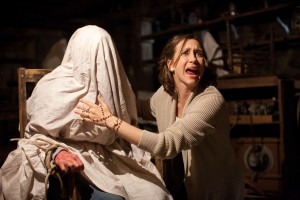 The main strength, as I mentioned before, of The Conjuring is the fact that it’s a smart horror movie.  Sure, there are a few “What the hell are you doing?!” moments, but the fact that everybody in the movie brings their acting ‘A’ game makes even the dumbest decisions more believable.  Vera Farmiga and Patrick Wilson are great as the married paranormal duo and to be honest, without them, The Conjuring would just be another standard haunted house/possession movie.  Thankfully it’s not, and thankfully director James Wan takes it back to the haunted horror roots, starting with the opening title sequence which had me reminiscing about classic 70’s and 80’s movies from the same genre (Ti West’s, The House Of The Devil also did this for me). 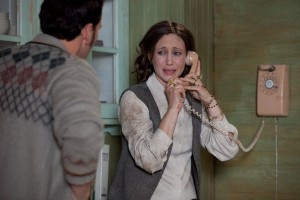 *they just told me nobody uses rotary phones anymore*

The concern that comes up every time a movie in this vein is released, is whether or not it is scary.  And trust me on this, The Conjuring is scary as hell.  It takes a lot to rattle me, but creepy dolls usually do the trick.  Add to that a well used bed sheet during one of the best exorcism scenes I’ve seen since the all time champion in 1973, and there were more than enough chills running up and down my spine.  We get the usual banging doors and a few well placed jump scares, but it just didn’t feel as cheap to me as in some of the countless attempts in recent cinema memory.  If you come to a movie like this, you want to be scared, and The Conjuring was firing on all cylinders here. 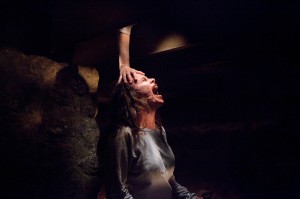 *the power of Christ compels you…..to use dandruff shampoo!*

Only a few minor gripes for me, and it mainly revolved around the fact that I wanted more of Ed and Lorraine and a little less of the Perron family. The reality that the Warrens were an actual paranormal team intrigued me, and I would have dug more of their backstory and a little less of the door slamming, but that’s just a minor complaint that I had.  There was also a moment towards the finale, where I slightly groaned because I felt that it should have ended just a little sooner and in a better spot.  But in the end, I honestly felt I had seen a horror movie for the ages and it’s no surprise, especially after it’s near $42 million box office intake, that a sequel has already been greenlit.  It’s rare that you can get a true old school horror movie like this in theaters nowadays, so go out and appreciate that.  Clap, Clap, Clap.