What’s that you say?  You need more movies about cannibalism?  Ok!  Lucky day for all of those thinking just that because the upcoming flesh munching flick, We Are What We Are, is getting some BIG buzz and positive reviews from it’s screenings at recent film festivals.  I stumbled upon the poster thanks to DestroyTheBrain.Com, but other than that and clip here or there on Youtube, you won’t find much in the way publicity for this one yet. 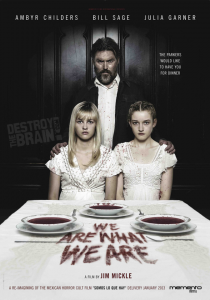 It’s a loose remake of a 2010 Mexican cult film with the same title (only in Spanish of course), and the American version will apparently still have a cannibalistic family but a different premise and story all around.  Like I said earlier, reviews are very positive and it sounds like something a little different than the usual ghosts and paranormal entries we have clogging the horror world nowadays. Look for more news on a release date for We Are What We Are and hopefully a trailer in the near future too.  And don’t forget that we have Eli Roth’s ode to cannibalism coming soon as well in the form of The Green Inferno, so it’s going to be a great year for cannibal movie lovers!  Don’t be shy, you know who you are.