Stop me if you heard this one before.  A guy gets so stressed out that a little fang-toothed monster literally comes out of his ass every time his stress…….What’s that?  You have heard that one before?  Then you must have seen the new horror/comedy, Bad Milo too!  And if you haven’t, then I either piqued your interest or made you form that ugly “WTF” scrunch face because you’re disgusted at the fact that a guy has a fang-toothed little monster up his ass. But enough about your ugly scrunch face, let’s get into the asses and little monsters!

Now upon my first viewing of the trailer for Bad Milo, I pretty much knew I would like it.  And after finishing the actual movie, I wasn’t far off from that assumption.  How could you go wrong with ass humor and bloodshed?  If you take a little bit of the cult classic Basket Case, add a smidgen of another cult classic It’s Alive, then throw in a pinch of Office Space – you’ll pretty much end up with Bad Milo. 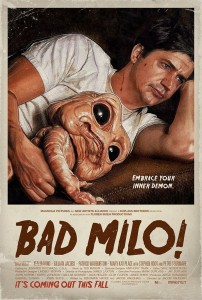 Ken (Ken Marino) is dealing with a lot of stress in his life between his job and family issues, and it’s causing him some major stomach discomfort.  He and his wife decide to get it checked out and the results show that he has a “trooper in his pooper”.  Referred to as just a polyp by his doctor, it comes to light that it’s much more than that one night when Ken is letting loose on the toilet while his wife Sarah (Gillian Jacobs) tries not to listen (a common occurrence in my household).

There are no metaphors here for what is going on with Ken.  He actually has a little monster that hides inside his ass named Milo, and it comes out when Ken gets super stressed.  It’s got fangs, but is also cute in a Gizmo from Gremlins kind of way.  Upon the disturbing discovery, Ken decides to go to a hypnotherapist (Peter Stormare), and it’s here where the comedy portion really hits it’s stride.  He convinces Ken that Milo is a part of him, that it’s his subconscious, and he needs to bond with Milo instead of be afraid. 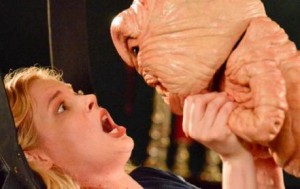 I know, I know – the story’s ridiculous.  But who cares if you’re entertained, right?  Bad Milo reminded me of an 80 minute Funny Or Die skit, but luckily it had more hits than misses when it came to the comedy so it didn’t wear out it’s welcome. There’s a fine line that you have to balance when you’re dealing with a horror/comedy and Bad Milo balanced that pretty well.  It definitely turns more horror towards the last 20 minutes and even attempts to pull at the heartstrings a little too.  Not uncommon by any means in your standard horror/comedy (Shaun Of The Dead and Slither), but I could have done without it in this case. 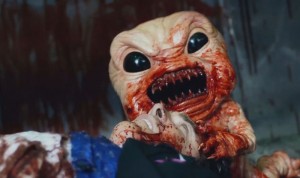 Ken Marino (Role Models, Party Down) earned the acting kudos here for making me believe that he actually had a little monster stuck up his ass.  Not an easy feat I tell you.  Peter Stormare (Fargo, The Big Lebowski) always impresses me and as I stated earlier, his therapist scenes got the biggest laughs (his delivery on the “It’s a metaphor!” line was gold).  Patrick Warburton (Seinfeld) and Stephen Root (Office Space) also are thrown in the mix to add a few more chuckles.

In the end (haha – I said end), Bad Milo did just enough to get a solid recommendation from me.  With all of the serious horror out nowadays it’s refreshing to be able to get a movie with the horror elements, but some laughs too.  It sets itself up for a chance at a sequel, which could be interesting, but this should probably just be a movie that stands on it’s own.  So the next time you feel a stress attack coming on, don’t worry.  You might just have your own little monster hiding up your ass waiting to make a surprise appearance.  On second thought, you can worry.