With the release of the much anticipated and delayed You’re Next in theaters today, it got me thinking about other home invasion movies that have come and gone throughout the years.  One, and only one, will always be at the top of my list though.  A movie that sticks with me every time I watch it.  A movie that makes me get down and pray to the horror Gods that it was invented.  No, not Jumanji – it’s the 2007 French masterpiece (yeah, I took it there) A L’intérieur or better known to you American citizens as Inside. 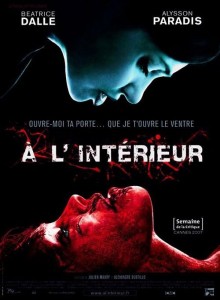 If you’ve seen it, hopefully you’re on my side then.  But if you haven’t seen it, the less said the better as far as the plot goes.  You want “Holy Shit!” moments?  You got ’em.  When I watched Inside for the first time, I had heard a decent amount of good buzz about it but honestly didn’t know much about the overall story.  Picture it like this:  It’s like watching the most fucked up stage play that you can imagine because the setting inside the house feels so intimate. ‘Cat and Mouse’ doesn’t even begin to describe the game that our victim Sarah (Alysson Paradis) goes through with one of the greatest onscreen villains EVER simply known as, The Woman. 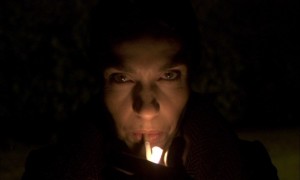 *gross – are you smoking Newports?*

She makes Glenn Close look like Strawberry Shortcake.  A movie like this is usually only as good as it’s villain.  And here, The Woman (Béatrice Dalle) is straight up EVIL.  She’s on a mission and she’s pretty good with a pair of scissors too.  The gore only amps up the tension as the film moves along because you honestly have no clue what to expect next.  Just when you think you’ve seen the worst, something else comes along to make you say “Dammmmmn!”.  Or maybe you might say “Fuuuuuuck!”.  Whatever your bag is.

Writing this makes me want to go watch it again and I’m getting the shakes. Yeah, I’m a bit obsessed with this movie and might need to seek out some kind of treatment.  It’s ok though, I’m a proud Insideaholic and have nothing to apologize for.  I embrace the bloody cinematic chaos and I will repeat again what I said earlier:  Inside is a masterpiece.  Now I’m sure that I’m going to like or even love You’re Next when I see it this weekend, but I’m positive of one thing.  It’s going to take ALOT of animal masks and well placed killing traps to dethrone the home invasion movie Queen, baby.  Did I just say baby?  I’m slipping. 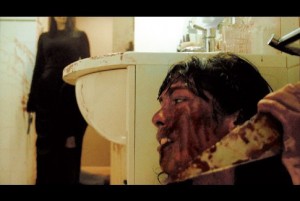