For over two years now, I’ve been hearing about this “fresh” and “inventive” horror movie called You’re Next.  In my eyes, it sort of fell into the category that Cabin In The Woods and Trick ‘r Treat occupied, as it was another horror movie that was getting rave reviews from various festivals but just couldn’t seem to get a big enough push to get on the big screen.  Then it finally happened.  The animal masks starting appearing.  The hype train started rolling down the tracks.  And before you knew it, ads and posters and a marketing machine for Adam Wingard’s You’re Next were everywhere.  The hype was real, but would the movie accept the daunting task of living up to it?

Hooray!  Paul and Aubrey Davison (Rob Moran and Barbara Crampton) are celebrating their wedding anniversary!  And what better way to celebrate than with all of their kids and their significant others in a big remote vacation home?  Ok – time for a sibling roll call!  Crispian (AJ Bowen) – the pussy with a chip on his shoulder.  Drake (Joe Swanberg) – the snobby asshole who thinks he’s better than everyone else.  Felix (Nicholas Tucci) – the quiet one who doesn’t smile.  And last but not least, Aimee (Seimetz) – the only sister who just wants to be recognized.

It wouldn’t be a party without their significant others though.  So we have Aimee’s boyfriend Tariq (Ti West) who should stay away from windows, Drake’s submissive bitchy wife Kelly (Margaret Laney), Felix’s gothic girlfriend Zee (Wendy Glenn), and last but certainly not least we have Crispian’s girlfriend Erin (Sharni Vinson) who seems normal and sweet as far as first impressions go.  So that about introduces everybody who will be attending the party.  Oh wait – I forgot about the three guys who wear animals masks that are out to try and kill the family with a variety of weapons like crossbows, machetes, and axes.  Oopsie!

*you always get to watch what you want*

At the dinner table, it’s clearly apparent that we have a strong case of sibling rivalry going on.  There’s bickering, yelling, sarcasm – basically you’re normal family experience.  That is until the arrows start flying through the windows unannounced and the “animals” start to hunt.  And once the hunting begins, that’s when the fun really starts.  The Davison family has to band together and we’ll find out who will step up and who won’t.  We’ll also find out that Crispian’s girlfriend Erin wasn’t exactly forthcoming about her Rambo-like survival skills.  Comes in handy though we’re you’re going up against three murderous guys in animal masks I suppose. 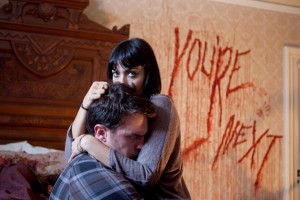 You’re Next is a horror movie, so you know there are twists, especially when you have this many characters around.  Don’t worry though, I’m not spoiling anything, but I will say that I personally spotted the first twist pretty early on.  It didn’t ruin the experience for me, but it hurt it just a tad.  I thought it was telegraphed just a little too much.  Notice I said “first twist” by the way.  Yeah, there’s more than one.  Fun!

Acting-wise, it was great to see the lovely Barbara Crampton onscreen again.  Still hard to get her Re-Animator breasts out of my head when I see her though, but I digress.  AJ Bowen always shines and I think it’s his time to jump to a big budget feature.  The star of the show besides the plastic animal mask, is Sharni Vinson as she puts her badassery on full display here.  I couldn’t help but imagine her as a better choice for the Mia character in the Evil Dead remake (no offense to Jane Levy). 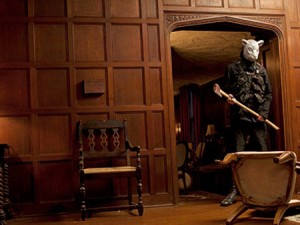 In the end, You’re Next pretty much met my expectations which is rare for a horror movie that has this much hype.  It was brutal and bloody, just how I like it, but also pretty clever in that it gave the whole home invasion genre a much needed boost.  I dug the nods to horror films in general (the Michael Myers head tilt when one of the killers was sitting on the couch after axing a victim in the brain was appreciated), and overall it made me appreciate independent movies even more (this was made for around 1 million dollars).  Loved when the soundtrack went all 80’s synth on my ass and I definitely did some googling to find out what song kept playing on repeat in the disc changer (‘Looking For The Magic‘ by the Dwight Twilley Band btw).

Just a few issues that stopped this from being a modern day horror classic for me.  Some of the acting was a little rough towards the beginning in my opinion, but it picked up as it went along so no real harm done.  I loved the creepiness of the animal masks and the sheer brutality of the killers, but after the first twist happens, the masks become pretty much irrelevant.  Not a huge bummer, but it took me out of the movie just a tad.  But regardless of a few shortcomings, what’s on display here in You’re Next is pretty special.  It’s an independent horror movie that knows it’s audience and knows what buttons to push.  Kudos to director Adam Wingard and to Simon Barrett for the script (he played one of the ‘animals’ in the movie for good measure).  Bet you’re gonna see a ton of You’re Next animal masks this Halloween by the way……..