Regrets are like assholes.  Everybody has them.  Sorry, my analogy skills are lacking today.  But anyway, when we talk about regrets, the tattoo industry is full of them.  That late night drunk thought of “Hey, I’m going to go get a tattoo!” sometimes is as bad of a choice as that last shot of tequila that you took.  And when it comes to horror-themed tattoos, there are honestly some fantastic ones.  But who cares about those when you can look at the shitty ones, right?  So without further hesitation, I give to you my top 10 worst horror-themed tattoos of all time! 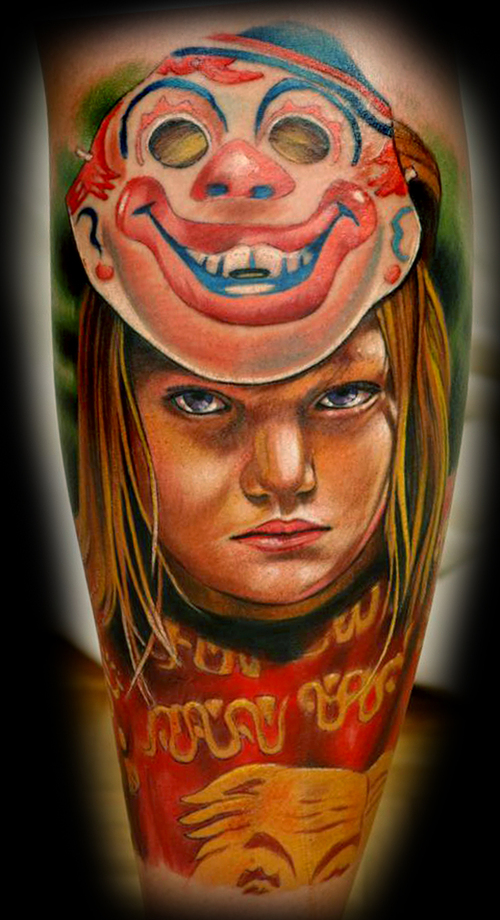 Ok.  This is actually done really well.  But why oh why would you want Daeg Faerch on your body when you could pick a way better Halloween movie reference to get tatted up.  P.J. Sole’s breasts from the 1978 original anybody? Much better. 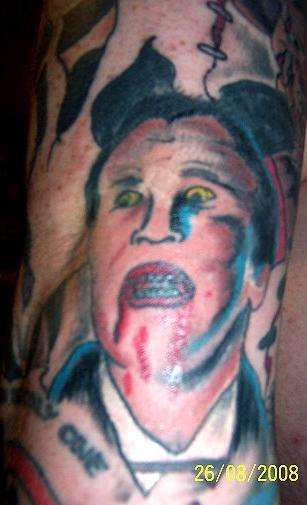 Well, it kinda looks like Dracula.  His teeth look a little more rotten though, almost like he’s wearing some grillz.  Those are popular with the kids these days.  And my eyes might be playing tricks on me, but does he have dog ears coming out of his head?  The random blue ink is a nice touch on the face too. Sarcasm’s fun. 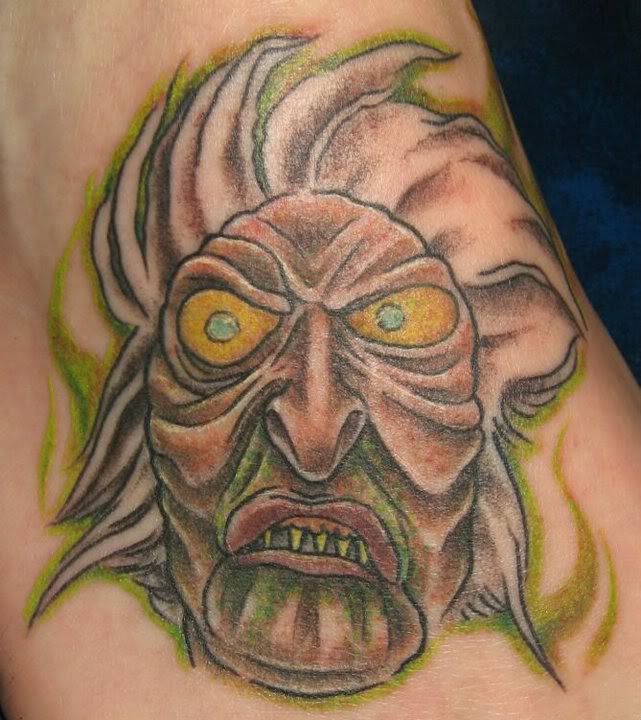 It takes some balls and courage to put a tattoo of what some would call the worst horror movie of all time anywhere on your body.  However, bravery comes in a distant second to shitty tattoos choices.

7.  Michael Myers And The Moon 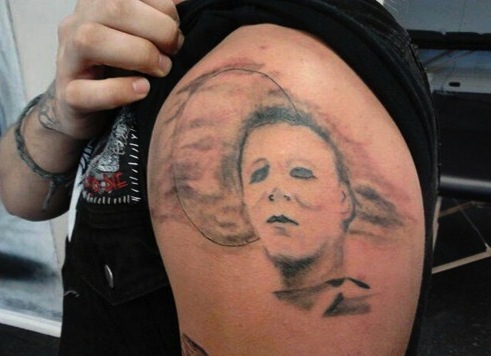 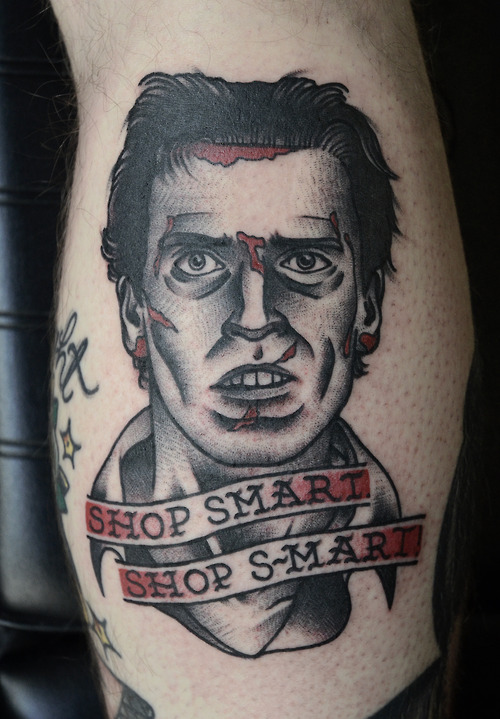 Alright then.  Let’s talk about the elephant in the room.  That looks nothing like Ash or Bruce Campbell.  Kind of looks like a hybrid of Butthead and Steve Buscemi to me though.  So if this person was going for a Steve Buscemi/Butthead hybrid, you knocked it out of the park. 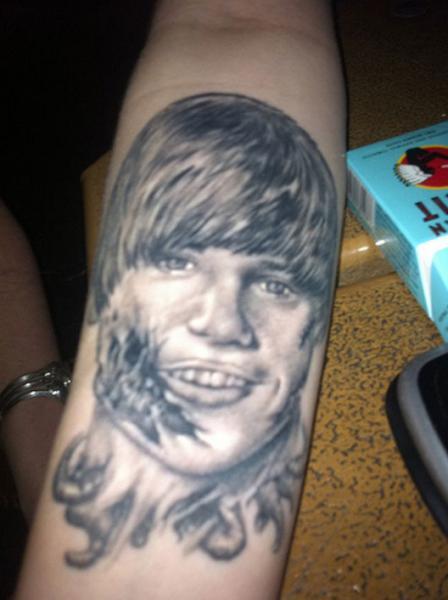 Just out of principle, anyone with Justin Bieber’s face tattooed anywhere on their body, even if it’s in comedic form, should be beaten repeatedly.  No exceptions.  Not even zombie exceptions. 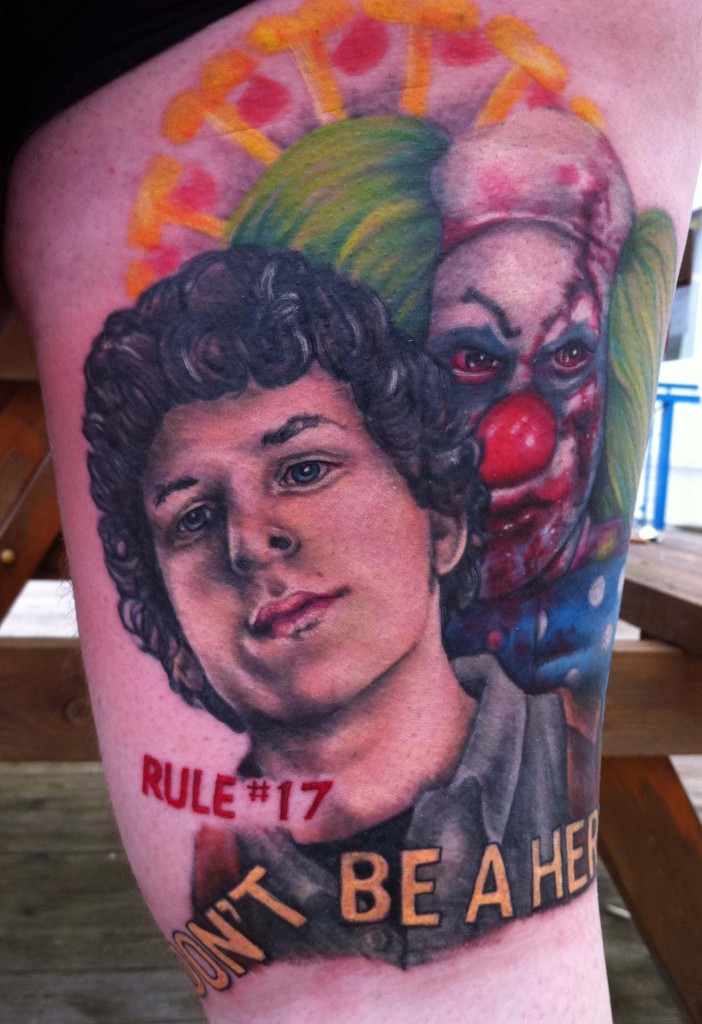 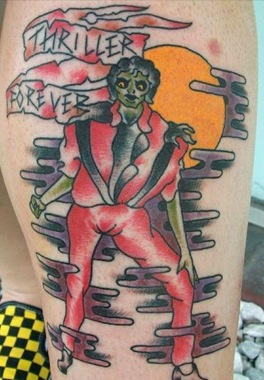 Yes – Thriller Forever!  And you’ll forever have a tattoo of zombified Michael Jackson on you that has strange disproportionate legs and an even stranger crotch.  Seriously.  What’s going on there?  I see a couple of lumps.  Looks serious.

2.  Freddy Krueger Glove In The Toilet 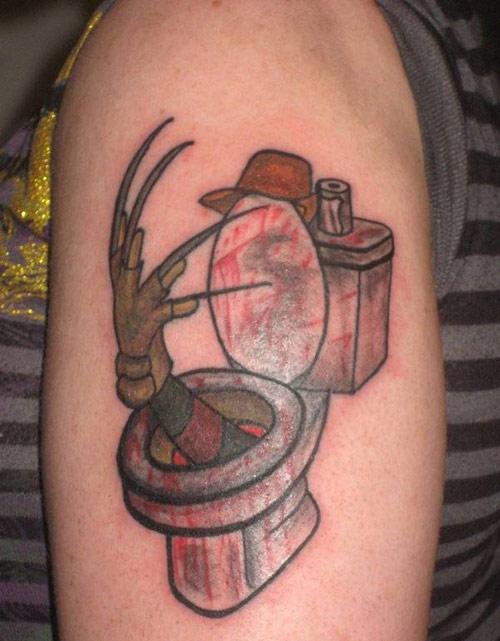 Hahaha!  It’s funny because it doesn’t make sense.  I’m all for creativity when it comes to choosing your tattoo, especially if it’s horror related.  And I’m sure when the light bulb came up over this person’s head when they were contemplating what to permanently put on their body, it probably said “I got it! A toilet with Freddy’s glove coming out of it!“.  I’m sure they also thought of all of the wonderful toilet puns that would come along with it.  Like:  That tattoo is shitty. That tattoo looks like shit.  That’s one shitty ass tattoo.

Alright!  All of your favorite Horror Icons have assembled onto this guy’s back in true Mt. Rushmore fashion.  Freddy!  Jason!  Michael!  Pinhead! Leatherface!  They’re all here in horrible tattoo form!  Seriously – when the artist was doing this for this poor bastard, do you think he felt any guilt?  A little maybe?  It looks unfinished, but nothing can save this tattoo from making the number one spot on the list.  Congrats.

So there you have it.  My list of the worst horror-themed tattoos.  Feel free to share your own if you have any, and please take a look at a few honorable mentions below on your way out.  Thanks for coming….. 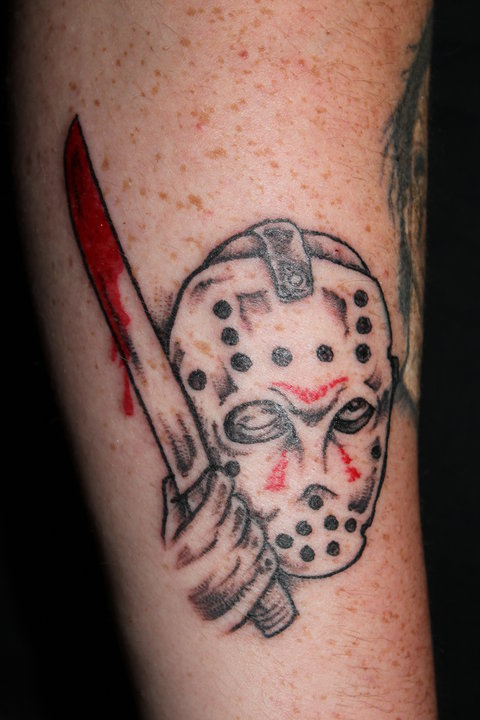 The tattoo somehow accomplishes the task of making Jason look even more “special” than he really was.  I somehow expect him to ask “Have you seen my baseball?” when I look at this. 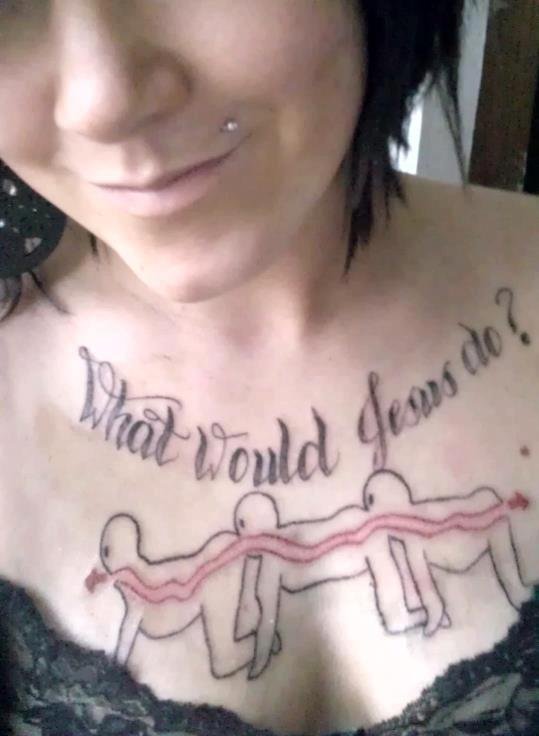 You know – I almost included this in the top 10 but was struggling with whether it was truly terrible or somehow awesome.  What makes it borderline awesome is that she put it under her “What would Jesus do?” tattoo.  Well played. 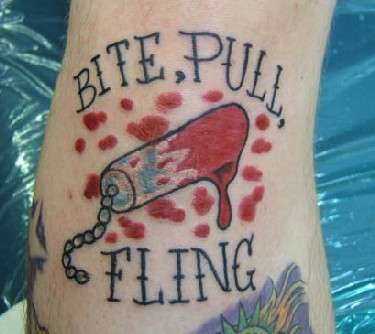