Meh.  I have a feeling there are going to be a lot of those in this review.  I really hate pointless remakes, especially when dealing in the horror genre.  Trying to keep an open mind can be tough when a remake is in the works, and my mind was already three-fourths closed when the remake was announced for 1976’s horror classic, Carrie.  Yes, the movie where the term ‘dirty pillows’ was introduced along with pig’s blood at the prom.  Directed by Brian De Palma with Oscar nominated performances from Sissy Spacek and Piper Laurie, the original Carrie stands the test of time based off of those performances and it’s vivid and intense imagery throughout.  So what about the remake?  Does it do the original justice?  Does it add anything new?  Meh.

For those unfamiliar, Carrie is based on the Stephen King novel and revolves around an awkward high school girl who discovers she has telekinetic powers. She also has a crazy bible thumping religious mother who would prefer to keep Carrie locked up in the house instead of letting her venture into the outside world.  With good reason because Carrie, played this time by Chloë Grace Moretz, is picked on at school and gets the worst of it after she unknowingly has her first period during gym class.  She screams.  She cries. And the other girls film it and throw tampons at her.  It’s not until Rita the gym teacher (Judy Greer) steps in that Carrie finally feels like she may have someone who actually cares about her. 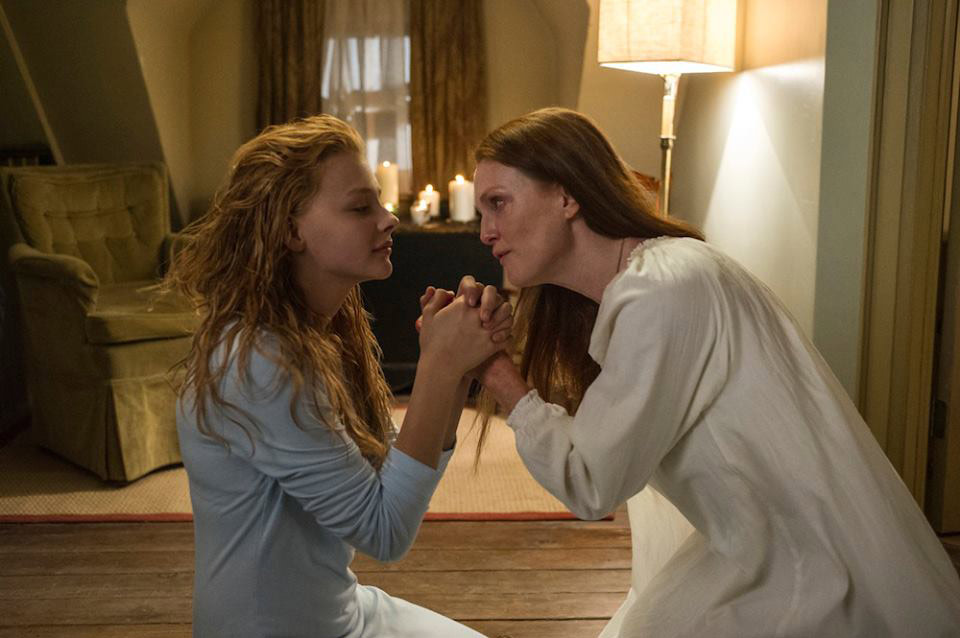 The girls who tormented Carrie are punished, and they plot their revenge, setting the tables for the upcoming infamous prom scene.  Meanwhile, Carrie’s mother (Julianne Moore) is at home reciting Bible verses and locking Carrie in a closet for what she considers sinning.  It’s throughout all of this that the telekinetic powers are discovered and Carrie understands how to control them. If you haven’t seen the original or read the book, I won’t spoil anymore for what happens after that.

This is a Carrie for the new generation.  Cell phones are used to film the period scene by the girls ,and then promptly thrown up on the internet.  The overuse of CGI sure does seem modern too.  Meh.  That’s meh number three if you’re counting at home.  Everything just seems so forced.  Aside from the serviceable performances from Chloë Grace Moretz and Julianne Moore, there isn’t much here.  The prom scene was forgettable (I’ll talk more about that in a minute) and the only scene that somewhat improved on the original was when Carrie confronts the car at the end carrying two of her tormentors, Billy and Chris.  Sadly, I was bored throughout and I couldn’t help but keep thinking about Sissy Spacek’s freckly face while I watched this remake.  Not in an inappropriate way mind you. 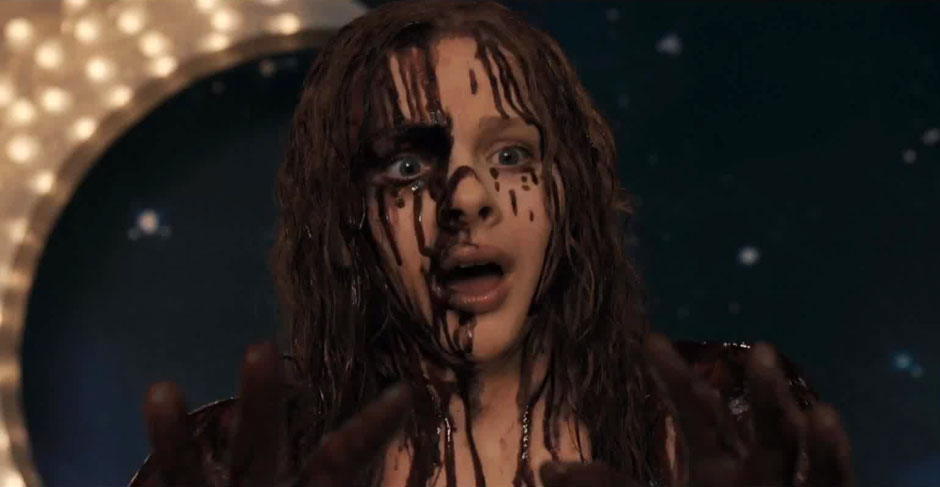 *Who needs some extra chocolate syrup for their sundae??*

Ok.  The prom scene.  It sucked.  Sorry for being blunt, but it did.  Did we really need three different consecutive shots of the pig’s blood dropping onto Carrie? And good god, I hated the music that was playing throughout this whole scene. It didn’t capture the pure evil that was supposed to be happening on-screen and it took me out of the moment.  Since this movie pretty much decided to copy everything beat for beat from the original, why could it not incorporate the whole “They’re all gonna laugh at you!” scenario during this scene before Carrie goes ape shit on everyone?  For shame.

In a nutshell, this is about as unnecessary of a remake as you can get.  Carrie was ok as far as today’s horror movies go, but since when is ok good enough? Nope.  Sorry – I’m not going to give high marks to a movie just because it falls into the whole “it could have been worse” category.  The lead performances were good and like I said earlier, the car scene got a thumbs up from me, but that’s it.  Everything else?  Meh.  That’s number four!