Well, I’m making due on one of my New Year’s resolutions already!  As I pat myself on the back, this is the part of the post where I tell you that I took my first step in trying to get to understand the Paranormal Activity franchise phenomena with a casual viewing of Paranormal Activity: The Marked Ones.

Now, I’ve seen the first Paranormal Activity movie and dug it for what it was, but wasn’t blown away.  The first sequel improved a little on the first, but again, I didn’t pop a horror boner over it.  The third was meh.  And the fourth I didn’t even bother to see because the word of mouth was so venomous.  So here we are with the fifth in the series called The Marked Ones, which is being toted as a ‘spin-off’ more than an actual sequel.  Not sure why though because elements from the other Paranormal Activity films are here in droves. 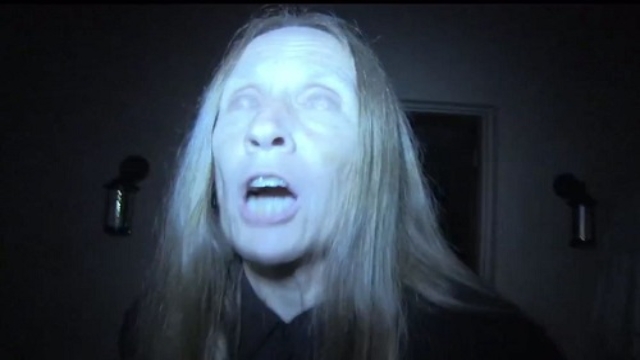 Here’s a quick rundown of the setup:  Based in a Latino neighborhood this time around, Jesse (Andrew Jacobs) just graduated from college and gets a camera as a present.  He then quickly starts to spy on Anna, the weird witch lady in his apartment complex, with it.  Seems like a good choice.  When Anna mysteriously turns up dead, Jesse and his friend Hector (Jorge Diaz) decide to snoop around the weird witch lady’s apartment.  Seems like another good choice.  It’s not long after that when Jesse discovers something is wrong with him and discovers a random bite on his arm.  And with a random bite comes super powers of course!

At this point in the story I was heavily reminded of last years super powers movie, Chronicle, as Jesse shows off for his friends Hector and Marisol.  Btw – do you need an air mattress blown up in a second?  Call on Jesse The Marked One!  Having trouble with gangbangers who want to steal your backpack?  Call on Jesse The Marked One!  He can serve all of your needs fast and efficiently.  But anyway, Jesse’s a “Marked One” thanks to a coven of witches and demons, so that’s bad news for him and everyone around him. His friends and grandmother want to help him and go to great lengths to do so, but does it work?  Nope.  Sorry, I guess that’s sort of a spoiler.

So what The Marked Ones gets right is basically the first half of the movie. Interesting setups are presented, but the payoff just doesn’t hit the mark in the end.  I’m over the whole shaky cam aspect too.  However, I did appreciate that there seemed to be more action before the final 15 minutes, unlike the previous Paranormal films.  And I also appreciated the resurgence of the classic memory game, Simon!  Only here, Simon is possessed by demons and answers questions for you a la the Quija board.  A bit of a bummer.

The acting is serviceable for this type of horror movie and there are a few good jump scares.  Overall though, it’s just pretty much business as usual in the Paranormal Activity world, other the fact that ‘time travel’ is introduced.  Still not quite sure what the hell was going on there, but we’ll possibly know more when Paranormal Activity 5 comes out later this year.

In the end, I didn’t hate The Marked Ones.  But unfortunately, it didn’t sway me to really jump on the Paranormal Activity franchise bandwagon either. Possibly later in the year when the official fifth sequel is released, that could change, but for now my New Year’s resolution to understand and appreciate this horror series is being put on hold.  I am however going to run out and buy Simon right now! Mission accomplished on that, The Marked Ones.