Yawn.  Oh, I’m sorry.  How rude of me.  It’s just that I’m a little tired of all of the “possessed/demon” movies as of late.  Wouldn’t it just be nice if someone could put a different spin on the subgenre and give us something new and fresh?  Good news everybody, because someone has done just that.

I first started hearing buzz about Here Comes The Devil last year.  I didn’t know much about it, other than the fact that it was a Spanish film and it had a pretty sweet poster and trailer to pique my interest.  Playing film festivals back in 2012, Here Comes The Devil received awards and acclaim and after watching the movie, those accolades were well deserved. 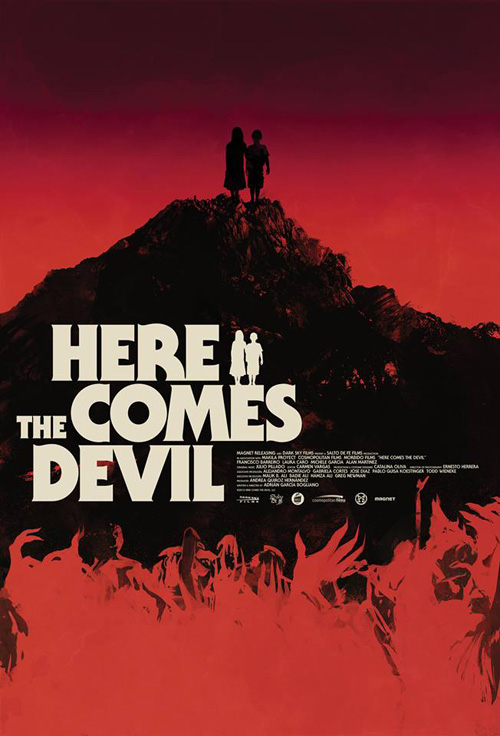 I won’t delve too deep into the story, because that’s part of the fun.  You should really go in pretty blind and I honestly wouldn’t even watch the trailer. What I will tell you is that this movie is not for everyone.  There is subject matter that will make some cringe and others completely tune out.  I however was engrossed throughout, and in the end, pretty satisfied (any movie that ends with death metal over the closing credits is alright in my book).

Here Comes The Devil revolves around a family who take a little trip through the outskirts of Tijuana.  Always a fun place to take the kids.  And apparently, it’s a very romantic spot too because while the parents (Francisco Barreiro, Laura Caro) are off getting it on, the two pre-teen children go exploring in some creepy caves.  They go missing and turn up a few days later.  But something is different about them, and the parents know it.  So they investigate, and what they find causes them to take justice into their own hands, unfortunately causing more problems and issues.  It’s hard to fix those problems when the Devil is involved though!  Doh! 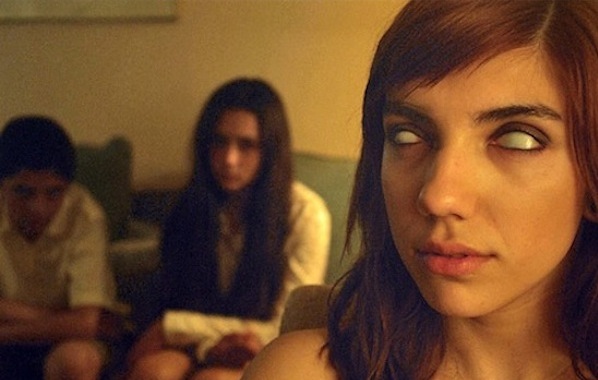 Director and writer Adrian Garcia Bogliano knows how to shoot a horror movie. The tone and overall look of Here Comes The Devil is the real star here, and that’s a true testament to Bogliano.  It feels like an old school movie straight from the 70’s (which I love), complete with fast zoom-in camera shots and a slow burn pace.  And it’s that slow burn pace that won me over because Here Comes The Devil never feels boring.  A bit too weird at times, even for me, it’s fairly obvious that Bogliano wanted to throw a couple shock moments in there to keep the audience on their toes.

Another aspect that we have here that makes Here Comes The Devil standout over all of the other possessed-themed movies is the acting.  Top notch all around as we really feel the pain of the parents when their children go missing and then feel what they’re going through when it’s discovered that something is definitely wrong with them.  Strong acting always helps with a slow pace too.  So does sound design, and Here Comes The Devil came out on top in that category as well. 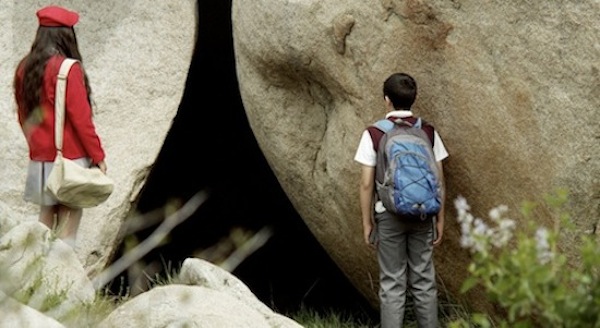 I will say that you should not go into this one expecting crazy off-the-wall demonic scenes and non-stop action.  It’s more psychological if anything.  A few pay-off moments happen (one of the best throat slits in recent memory), but the majority of the film focuses on messing with your mind and not going the cliche American horror movie route.  As I mentioned earlier, there is some subject matter which deals in sexual nature that might be a bit much for some to get onboard with, so be cautious before hitting play.

Here Comes The Devil is a dark movie.  I say that in a good way of course.  I was actually a bit surprised as to how it all wrapped up somewhat nicely in the end too.  Maybe it’s because I was expecting one of those ridiculous abrupt “I’m too smart for you” endings that seem to be all too common, but I was pretty satisfied when the credits rolled (again, can’t emphasize enough how the death metal put a smile on my face).  A perfect movie?  Not quite.  But definitely one that deserves to be talked about during a possessed-themed horror movie roundtable.