One of the highest compliments that a third movie in a horror franchise can get is “Well, at least it was better than the second one.”  Welcome to that compliment and welcome to Cabin Fever: Patient Zero, the third film in the Cabin Fever franchise and the second one that is going straight to DVD.  But as the great Harvey Keitel once said, “Well let’s not start sucking each other’s dicks quite yet….”

Let’s start at the beginning, shall we?  I actually loved Eli Roth’s original Cabin Fever.  I dug the dark comedy involved, and when the itchy shit hit the fan, I dug how the paranoia was played out between the cast.  Then the sequel known as Cabin Fever 2: Spring Fever (it even had a terrible name) came at us in 2009 and took a dump on everything that made the first so good.  Even director Ti West pleaded to have his name taken off the project.  So because the second movie was such a raging success, the powers that be decided it would be a super idea to give us Cabin Fever: Patient Zero this year.  And even more super is the fact that they decided to give us two different narratives in the movie too! 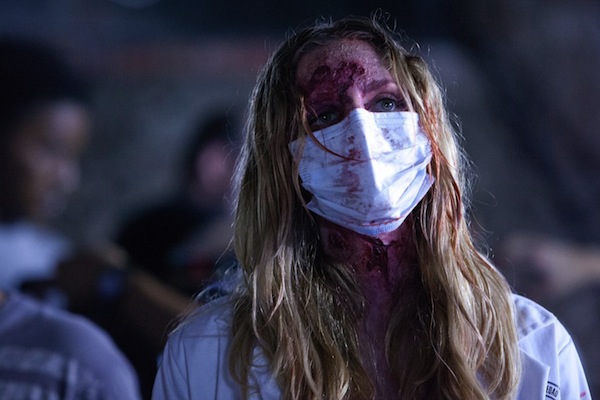 The skinny on the plot is basically this:  Sean Astin (The Lord Of The Rings, The Goonies) plays Porter, a guy who has been thrown into containment in an underground medical center after being deemed ‘Patient Zero’.  Porter’s infected with an unknown virus and spends his time in quarantine singing the nursery rhyme “Three Blind Mice” and smearing blood all over.  While he’s having fun doing that, we switch to our other narrative which consists of four 20-something kids off to a remote island for a fun-filled bachelor party!  Sadly, no coke-sniffing donkeys make an appearance, but a bunch of dead fish do in the water while two of our attendees go scuba diving.  After this, things go awry as we the audience and the characters soon learn that the water is contaminated and bad and gross things are about to happen.  The two narratives eventually join up in the end for even more zany fun.

Let’s start with the good.  Cabin Fever: Patient Zero has one of the best ‘gun backfire death scenes’ of all time.  So if that excites, you’ll be happy.  If watching Sean Astin chew his scenery during the first half of a movie excites you too, you’ll be extra happy.  And oh yeah – – if you’ve ever wanted to see two hot infected slimy girls have a cat fight with a bunch of squishy sound effects happening, you’ll be super duper happy!  And that ends the list of good things.

On to the bad now.  The tone is just way too serious here.  Part of what made the original Cabin Fever so fun was the great balance of comedy and paranoia/dread.  Here we just have a lot of unintentional comedy and bad acting. There are some nods to the original along the way (a replica of Jordan Ladd’s face decay) and a few times where they try to one-up it as well (using a tongue instead of some fingers).  The gore is serviceable for the most part, but the second half of the movie is just too darkly lit to really appreciate anything. And speaking of that unintentional comedy, the pic below is of an actual “scientist” in the underground lab. 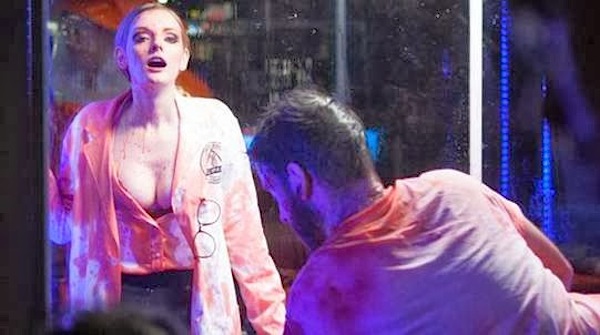 Cabin Fever: Patient Zero at the end of the day is what you would expect from a direct-to-video third entry in a franchise.  As alluded to earlier, it’s better than the last one, but fails to really climb any higher than a medium budget Syfy Channel movie.  It’s takes itself way too seriously and when it does finally try and put a little tongue in cheek, it’s too late.  A few good gore bits aside, there just isn’t much here to have a good time with.  And a good time is what I want to have if I’m watching a Cabin Fever movie.