There’s something refreshing about hearing the word throwback.  Especially when you’re talking about horror movies.  My ears perk up like an excited dog, because I immediately transport myself back to the days of old, musty smelling, small town VHS rental spots where everybody knew your name.  Kind of like Cheers, but with dingy clamshell VHS cases instead of frosty beers. And the new Sci-Fi/Horror hybrid, Almost Human, is the definition of throwback.

I had been hearing a lot of buzz surrounding first time director and writer Joe Begos’ alien horror movie, Almost Human.  Screenings were popping up, a trailer was released sporting high praise from those who had seen it, and retro ads (my favorite) were being spotted around the web.  So when I sat down with it the other day, I was somewhat excited.  Not pee my pants excited, but excited nonetheless.

Almost Human doesn’t waste any time as far as getting into the set up.  And considering it clocks in at just over 70 minutes of actual movie (10 minutes of credits), it doesn’t have any time to.  The story begins in 1987 on a night where Seth (Graham Skipper) witnesses his friend Mark (Josh Ethier) get sucked up into the sky by a bright blue beam.  Cut to two years later, and Mark suddenly appears naked in a forest, but not as his old self.  He’s become some kind of alien, you see. One that can open his mouth and screech out a mind-numbing sound and also one that has plans on turning a small town into aliens just like himself.  His friend Seth knows that something’s wrong, and knows that he’s probably the only one who can stop him. 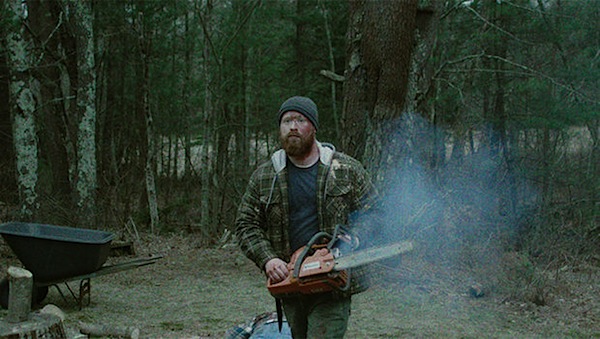 As you watch Almost Human, you’ll realize two things.  First:  the acting is pretty bad.  Second:  there is a such a love and homage to movies like The Thing, Invasion Of The Body Snatchers, and The Hidden that it almost outweighs the bad.  I’m actually still on the fence about whether the level of acting was intentional or not, considering the retro flavor that embodies this movie.  It seemed to be taking itself a little too seriously at times, and had it gone even a little more tongue-in-cheek (like the insemination sequence towards the end), I think I would have had a better time with it.

What I did have a great time with was the old school approach that Almost Human had when dealing with the gore and practical effects.  That’s what kept me sticking around, because to be honest, I didn’t really care that much about the story.  I almost found myself fast-forwarding to Mark’s next rampage kill sequence (some of which were offscreen sadly), and unfortunately that can only go so far. 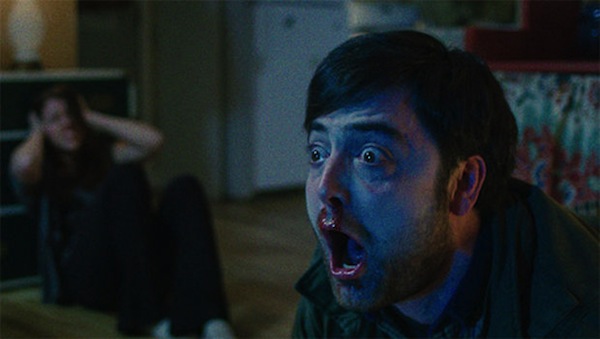 Even though I didn’t have as great of a time with Almost Human as I had hoped, I still have to applaud Joe Begos for satisfying my 80’s horror craving. I’m looking forward to what he comes up with next, especially with a bigger budget. The throwback heart was in the right place, and I want one of the VHS copies that they were giving away at some of the screenings.  To me, that’s what Almost Human is all about.  Blowing the dust off your VCR, popping it in, and pressing play.  Mmmmmm…..nostalgia.