Having a rough life?  Are you down because you lost your job and your wife left you?  Don’t worry!  Come on down to ‘Eden Parrish’ and drink your troubles away.  Just be prepared to die a quick, agonizing death because there is cyanide in that drink.  Welcome to director Ti West’s new film, The Sacrament, which is basically a modern day re-telling of the Jonestown massacre from the 70’s the revolved around a crazy religious commune in South America.

Director Ti West can really do no wrong with me.  Liked his first film, The Roost.  LOVED his second film, The House Of The Devil.  And liked his third one called The Innkeepers.  So that’s two ‘likes’ and one ‘LOVE’.  Not too shabby.  And with The Sacrament, I was pretty excited because I love movies about crazy religious cults and was curious to see Ti West’s take on the subject.  What I didn’t really know going in, is that it’s basically an exact take on the actual events of the Jonestown Massacre in 1978.  A bit of a bummer, but needless to say, I still enjoyed it. 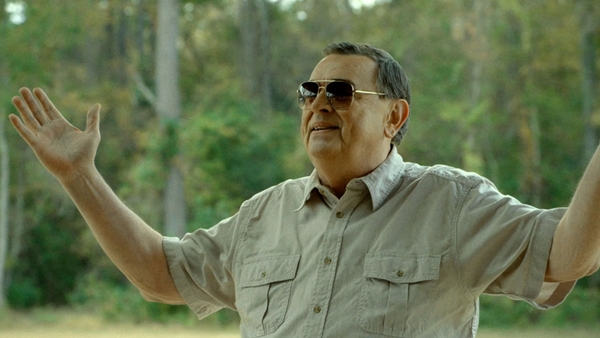 Without spoiling too much, here’s a quick plot synopsis:  Patrick (Kentucker Audley), a photographer along with his documentary crew consisting of Sam (AJ Bowen) and Jake (Joe Swanberg) head to the religious compound ‘Eden Parrish’ to find Patrick’s sister Caroline (Amy Seimetz) after receiving an odd letter from her.  Upon arriving, Patrick and his crew are taken in and proceed to interview some of the residents, all of whom seem to be extremely happy to be living there. It isn’t until an interview with a man they call Father (Gene Jones) happens, that our visitors realize that all might not be right in ‘Eden Parrish’.

Let’s talk strong points first.  Gene Jones steals the show as the ominous Parrish leader.  It’s a character that you know is bad from the get-go, making him even more intriguing.  As The Sacrament rolls along, you’re waiting for that payoff to happen.  And for me, the payoff is pretty satisfying. That’s thanks in large part to director Ti West who knows how to build the tension and has really become a master of the ‘slow burn’ horror movie.  This is his best shot film so far and the progression he’s had since The Roost is evident and I can’t wait to see what he does next. 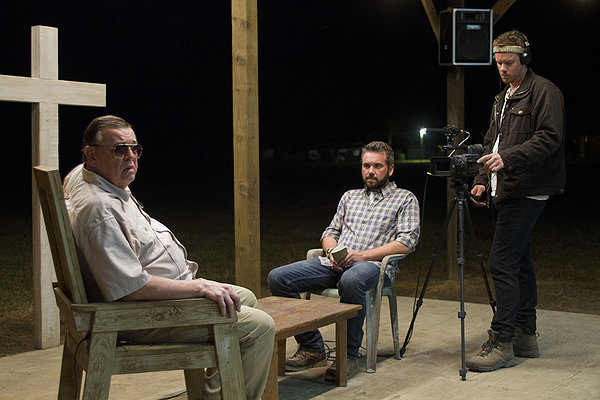 Now, on to the negatives.  The biggest for me is that this concept has been done before.  Not only is The Sacrament pretty much a re-telling of the Jonestown Massacre, it was hard for me to watch it because director Gareth Evans did it so much better in V/H/S/2 with his short, Safe Haven.  That segment went full ‘balls to the wall’, leaving me with my mouth open when it was over.  The Sacrament seemed a bit too safe for me at times, even though it had a few shocking moments (a throat slit that’s very uncomfortable to watch for starters).  Some of the acting was a little wooden as well, but overall all of those involved were able to hold their own so it wasn’t too distracting.

Don’t see The Sacrament for an interesting original story that hasn’t been told or seen before.  See it for the performance from Gene Jones and for the directing style of Ti West.  Not as groundbreaking as I had hoped, The Sacrament still impressed me in enough spots to recommend it and actually led me to do some research and read about the Jonestown Massacre. Learning is fun!