A small disclaimer:  I will do my best to not use stereotypical Australian puns in this review of the Australian outback horror movie, Wolf Creek 2.  In an attempt to not conform to the usual misconceptions that Australia is all about big knives, Fosters beer, kangaroos, and dingos eating babies – I will take the high road throughout this review.  Oh, crikey!  Looks like I’ve already slipped up.

In 2005, writer/director Greg Mclean’s Wolf Creek was a nice little Australian take on the horror slasher genre.  The Australian backdrop visuals were a feast for the eyes, but the real star was actor John Jarrett, who portrayed Mick Taylor with just the right amount of dark humor and evilness to boot.  Wolf Creek didn’t reinvent anything, but it was a nasty little piece of work in the best way possible and gave birth to a new horror villain.  So naturally, I was pretty excited that after waiting over 8 years, we would finally be getting a sequel from Mclean and Jarrett. The only question is:  Did they wait too long? 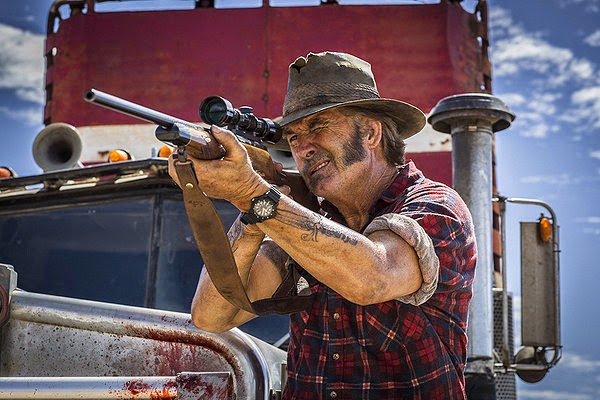 Wolf Creek 2 starts strong with Mick getting pulled over by a cocky veteran cop and his smart-ass trainee.  Even though you pretty much know how it’s going to end for the law enforcement duo, it’s still a tense opening and sets up a lot of promise for the rest of the movie.  From there we meet a young German couple Rutger and Katarina (Philippe Klaus and Shannon Ashlyn) who are hitchhiking across the outback and later one night, have Mick stumble upon their camping site.  You see, Mick doesn’t really take kindly to foreigners in Australia and in return, does his best psychotic Crocodile Dundee impersonation to prove his point.

Without spoiling too much, two cat-and-mouse sequences follow.  One with Mick and Katarina and another with Mick and a British surfer named Paul (Ryan Corr) who drives by and tries to help Katarina.  It’s that second sequence that takes a big chunk out of the movie and thankfully ends up getting better after being pretty ridiculous early on.  When Mick has Ryan in his lair, that’s when Wolf Creek 2 is at it’s best.  Unfortunately, it takes a loooooong time to get to that point and this movie definitely could have benefitted from some post-production trimming.

As far as the acting goes, John Jarrett once again steals the show, but he became a little too cartoonish for my tastes this time around.  It bordered on how I felt when Freddy Krueger starting spouting quirky one-liners in the later Nightmare On Elm Street sequels.  I could have easily done without the scene where Mick is speeding down a road in a semi-trailer truck hitting a bunch of jumping kangaroos while saying “Oooooh – sorry Hoppy!“.  Ryan Corr did a great job as the poor tortured and hunted leading man and the scene with him and Mick playing a twisted game in Mick’s dungeon is a major highlight.

Overall, I liked Wolf Creek 2 whereas I borderline loved the 2005 original.  At a runtime of 106 minutes, it could have easily been cut down to 90 mins and been a better movie for it.  At times the sequel is brutal (in a good way) and at other times, the cartoonish element takes center stage and the overall product suffers because of it.  With the way this one wraps up, it’s fairly evident that there could be a Wolf Creek 3 in the future, but let’s hope that we don’t have to wait 8 years to get it.  And if and when we do get it, let’s get back to making Mick a sick bastard and less of kangaroo-killing wise cracker.