Bigfoot seems to be all the rage these days.  He has his own terrible “reality” TV show called Finding Bigfoot.  He has his own statue that you can order from SkyMall Magazine when you’re bored on an airplane.  And thanks to director/actor Bobcat Goldthwait, he now has his own found footage horror movie called Willow Creek!

Found footage horror is like a delicious double layered chocolate cake that I know is bad for me and I always do my best to stay away from it.  Temptation usually gets the best of me though, and I end up having frosting all over my face when it’s all said and done.  Willow Creek is this week’s double layered chocolate cake.  I’ve dug Bobcat Goldthwait as a director so far (World’s Greatest Day, God Bless America) and was intrigued and interested as to what his take on the horror genre would be.  What we have here in Willow Creek is back-to-basics found footage territory a la The Blair Witch Project, which isn’t a bad thing. 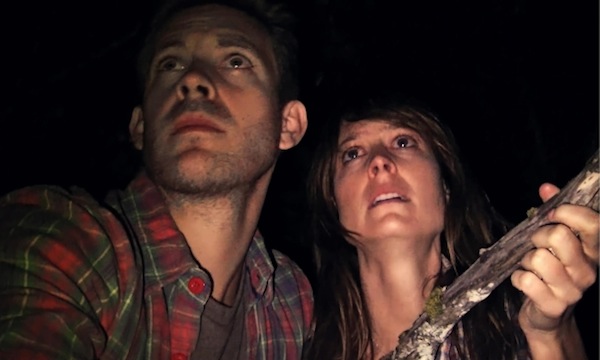 The story is simple and benefits from the 80 minute runtime overall.  Jim (Bryce Johnson) is a bit obsessed with the mystery surrounding the Bigfoot legend. So he sets out on a journey up to Bigfoot Country in Willow Creek, California with his girlfriend Kelly (Alexie Gilmore) to get some footage of the local townsfolk and hopefully of the big man himself.  It starts out fun and innocent, as the pair munches on some Bigfoot burgers at the town’s popular eatery and talk about how large Bigfoot’s penis could be. Then it takes a bit of a turn as they’re warned by a local in that typical “You’re all doomed!” horror fashion, and are told to turn around before entering the woods.  You can guess where it goes from there, and where it goes is both frustrating and entertaining at the same time.

Willow Creek doesn’t reinvent anything when it comes to horror or the found footage subgenre.  What it does do is get back to the basics, which is usually a good thing.  Some will find Goldthwait’s first horror effort boring and predictable, and others like myself will find somewhat engaging and interesting. The acting helps, as both characters aren’t too annoying, which can always be a problem in movies like this.  Then there’s that build-up as to whether or not you’ll actually get to see the legendary hairy monster or not.  I won’t spoil if you do or don’t, but I found myself really wanting to take a road trip up to Northern California soon to do my own exploring and probably shit my pants in the process.  I also found myself wanting to make a purchase from the SkyMall magazine.

Even though I’m giving mostly kind words to Willow Creek, it’s not without it’s shortcomings.  Some scenes (particularly when Jim and Kelly are in the tent) go on far too long and it feels like Goldthwait is stretching for time instead of building tension.  The main problem I always have with found footage movies is here as well, and that’s the idea that someone would keep filming if they or a loved one is in serious danger.  I know, I know – it’s a movie and if they dropped the camera it defeats the purpose.  Reality is a nice notion once in a while though.  Those minor gripes aside, Willow Creek is a harmless, but fun little addition to the horror family that puts shine on the Bigfoot phenomena way better than any crappy reality show can do.