Back in 2002, I stumbled upon the movie May – a film about a girl who is dedicated (and I mean really dedicated) to creating the “perfect” friend.  It blew me away and I had the writer and director, Lucky McKee, to thank for that. Angela Bettis wasn’t too shabby either.  So because of May, I kept McKee on my radar and I’m glad I did because in 2011 he came strong with the sick and twisted misogyny tale, The Woman.  I notice a focus and theme of the female character with all of his movies, so it came as no surprise when I heard about his latest effort – All Cheerleaders Die.  After watching it, I have good news for anyone who has been waiting for a movie about lesbian cheerleaders who die and come back to life to exact revenge on the high school jocks who killed them.

The first thing you might think about after watching All Cheerleaders Die is that it is somewhat similar to the 2009 horror/comedy, Jennifer’s Body. There are hot girls in both movies, lesbian kisses, occult happenings, and revenge killings. As a matter of fact, after writing that last line, they are a lot similar. Make no mistake though, All Cheerleader’s Die has it’s own identity and Lucky McKee and co-director and writer Chris Sivertson know how to bring the fun out.  Don’t worry horror fans, they didn’t forget the T&A and gore either. 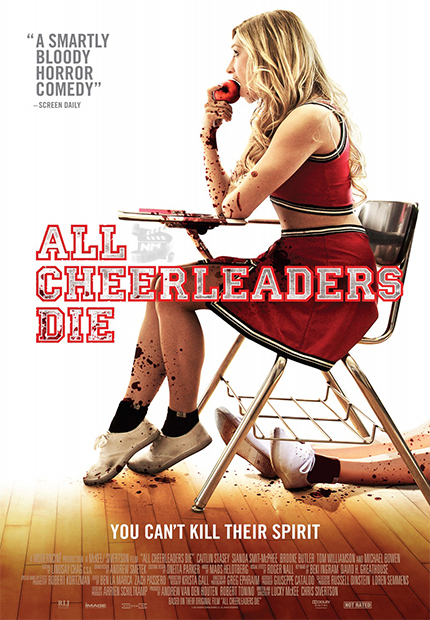 The plot is a bit convoluted, but here it is in a nutshell.  Maddy (Caitlin Stasey) the melancholy lesbian, who is trying to put together a documentary about the high school cheerleading squad.  During her filming, a cheerleader gets dropped on her head and dies.  So the natural thing for Maddy, out of curiosity and lust, is to join the squad and seduce a blonde cheerleader named Tracy (Brooke Butler).  Not a smart move because this pisses off Maddy’s ex-girlfriend Leena (Sianoa Smit-McPhee) who happens to be a Wiccan and practices witchcraft.

To add to the complex love triangle, we’ll throw in the high school quarterback Terry (Tom Williamson), who is not too happy with his girlfriend Tracy’s choice to get down with Maddy.  A fight ensues, and so do the car-crash deaths of Tracy, Maddy and two other cheerleaders.  Bet you’re wondering when that Wiccan witchcraft is gonna come into play, huh?  Fear not, because Leena resurrects all four girls to get their revenge on Terry and his asshole jock friends.  Hooray!  We made it through the plot. 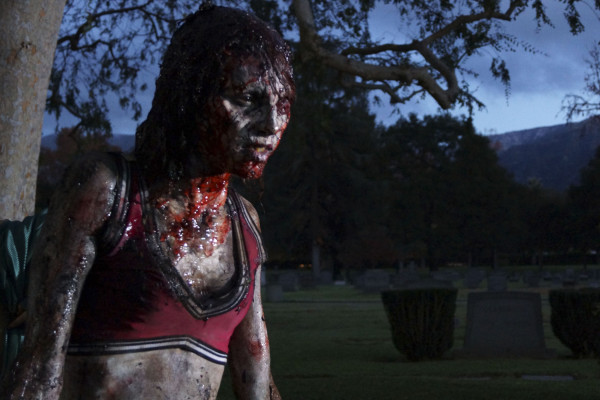 All Cheerleaders Die is obviously not to be taken too seriously, and in my eyes it’s a nice little throwback to the days of horror in the 80’s when it was ok to do that.  The acting is pretty solid across the board, and the film itself is colorful and pleasing to the eyes (not just talking about the cheerleaders either).  On the downside, at a runtime of 90 minutes, it actually seems to drag a lot in spots and you get a bit impatient waiting for the carnage to begin.  I’m fine with buildup in horror movies, but I think my impatience here had a lot to do with the plot being a little too overstuffed as I mentioned earlier.  Sometimes too many characters can be a bad thing.

In the end though, I commend Lucky McKee and Chris Sivertson for giving us a horror movie that can be fun.  It’s a welcome break from the constant flood of found footage (try saying that 5 times fast) and possession movies that have been piled on over the last few years.  Although a bit uneven and semi-boring at times, All Cheerleaders Die is definitely worth a watch and if you like it (I would say it’s 50/50 that you will), it looks like from the ending that there will be a Part 2 coming soon!