Oh – sorry…..I fell asleep watching Annabelle and I think I just woke up.  Let me go watch it again and I’ll get back to you with the review.

Ok – done!  I know, I know….I’m about 2 weeks late with a review for this movie, but good things come to those who wait.  Unfortunately, no good things came to me from watching this piece of crap and I’ll share my thoughts on that now.

For those who aren’t aware by now, Annabelle is a prequel to 2013’s amazing spookfest, The Conjuring, only it’s pretty far from amazing in it’s own right. What this movie is supposed to accomplish (besides being an obvious cash-grab by the studio) is to show the origin of how Annabelle the doll become inhabited by something evil.  And there’s nothing more evil than some crazy murderous Charles Manson cult members to set things in motion. 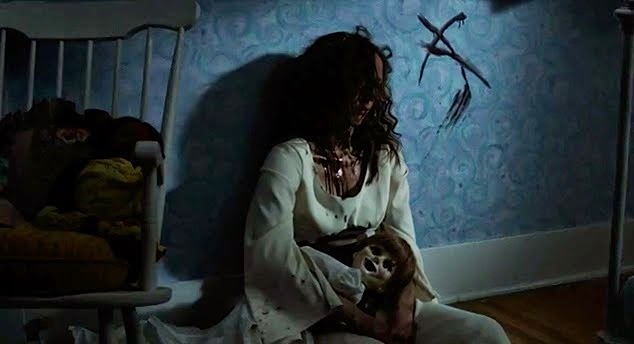 I’m honestly going to keep the bulk of this review very brief.  Annabelle becomes possessed when a psycho cult member bleeds onto her after smearing the cult’s symbol in blood on the wall before dying.  A Brady Bunch type couple (Annabelle Wallis and Ward Horton) who’s house it happens in, decide to keep creepy-ass Annabelle and in addition are about to have a baby.  In keeping with traditional horror cliches:  Bad things happen, the baby is in danger, and the couple decide to still keep Annabelle in the house.  A priest and book store owner (Tony Amendola and Alfre Woodard) who happen to specialize in the occult, cross paths with the couple and figure out a way to rid the doll of the evil.

The acting across the board is ok at best, but ok acting isn’t going to get Annabelle very far, especially when it’s the least of it’s worries. The Conjuring was ground-breaking horror filmmaking, and now it’s been tainted by this ‘so dumb it’s not good’ prequel that will most likely get another addition to the franchise because the masses ended up giving their money to it.  I did happen to gain some insightful knowledge from the movie, so let’s end this review with the Top 5 Things I Learned After Watching Annabelle:

*  Annabelle doesn’t like listening to baseball games on the radio

*  Rocking chair sales should skyrocket after this movie