Everyone hears voices in their head every now and then.  I’m hearing one right now telling me to go get a breakfast burrito, but I’m going to ignore it and keep writing this review.  Unfortunately for actor Ryan Reynolds in the new horror/comedy The Voices, he hears a lot of them and mostly from his pets who appear to be able to physically talk and trade insults with each other as well.  Oh – and some of them also encourage him to murder people.  Looks like my voice telling me to grab a delicious Mexican breakfast treat isn’t so bad after all.

If you look up the word ‘quirky‘ in the movie dictionary, then chances are you will see The Voices next to it.  Take some dark comedy and some dark horror, throw it in a blender and marvel at what the creation is.  Director Marjane Satrapi (Persepolis) is known to have a bit of a flair behind the camera and can really make set pieces and actors pop off the screen.  Such is the case here and because of that, The Voices is definitely never boring to look at.  But are the characters and plot on the boring side?  Let’s discuss.

Jerry (Ryan Reynolds) is a bit of a loner and outcast, but appears very chipper despite all of that.  He works in a factory and sees a psychiatrist regularly – oh and he has a cat named Mr. Whiskers and a dog named Bosco that constantly talk to him.  These kinds of things can usually deter most people, but Jerry likes to think he’s normal and because of that, refuses to take the medication that his psychiatrist prescribes.  He’s happier in this fantasy world, which a lot of us can relate to.  A girl at work named Fiona (Gemma Arterton) catches his eye and Jerry gets up the nerve to ask her out to dinner at a pretty amazing Chinese restaurant, complete with Elvis impersonator and all. 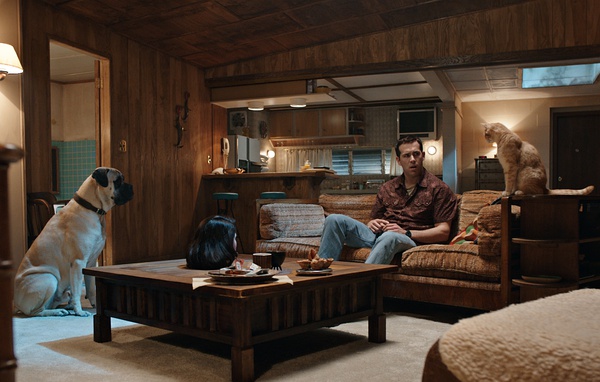 Fiona basically stands Jerry up and hits up the karaoke bar with her girl co-workers instead, including Lisa (Anna Kendrick) who seems to have a bit of a crush on Jerry.  After realizing Fiona isn’t showing up, Jerry heads home depressed but ends up picking her up by chance on the side of the road because she has car trouble.  After agreeing to get some late night grub together, things go south quick as Jerry starts to creep out Fiona.  She bolts out of the car and runs into the woods, and it’s there that Jerry “accidentally” kills her.  Then he takes her body home to dismember it with encouragement from his cat Mr. Whiskers.  Uh oh!

This is where things take a darker turn obviously, as Jerry stacks a few hundred tupperware containers full of Fiona’s body parts and keeps her severed head in his refrigerator.  And like his pets, she talks to him when he doesn’t take his medicine.  Fiona’s head is lonely in the fridge, so she pleads with Jerry to get her a friend – meaning of course that more killing has to be done!  Throughout all of this, Jerry becomes a bit smitten with Lisa from work, but the voices he hears keep trying to take over and want him to murder her as well.  Does he do it?  Does he ignore the voices, take his medicine, and live happily ever after with Lisa?  It’s a crap shoot – could go either way….. 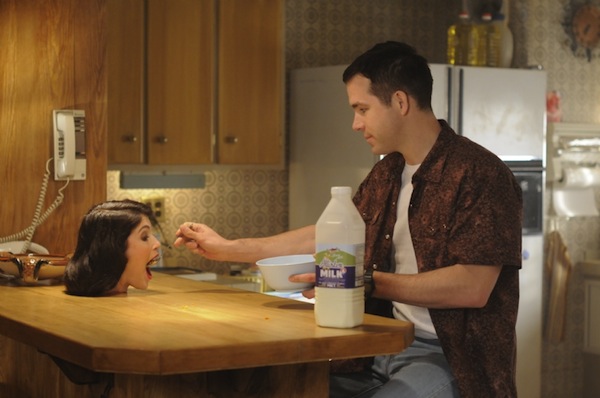 I’ve heard other reviewers say that The Voices is Ryan Reynolds’ best performance of his career, and I’d have to agree with that.  To the chagrin of my wife who worships The Proposal, this would be top of the ladder as far as Ryan Reynolds performances go – with 2010’s Buried being a close second. Even more impressive is that he did all of the voices of the animals who talk to him in the movie.  Anna Kendrick and Gemma Arterton put in work too and deserve some praise.  Not everyone can play a severed head convincingly. This is Ryan Reynolds’ movie though, and he steals the show.

One thing that I didn’t expect was to feel sympathy for a murderer, but that was the case here, especially during a ‘tough to watch’ flashback scene of the final moment with his Mom that gives verification to Jerry’s condition and why he is who he is.  The quirky outweighs the serious though (except in the last 20 mins or so), which is where The Voices excels and earns most of it’s points.  It does tend to go on a bit too long, with the schtick getting a little old after awhile, making it run about 15 minutes more than it should have.  Aside from that, I really enjoyed the strange and sometimes depressing ride that The Voices took me on.  Kudos to that Ol Dirty Bastard karaoke scene by the way.