I grew up with a pretty extreme fear of giant rats and chickens.  Clearly that sounds ridiculous, but try telling that to a 7-year-old boy who watched 1976’s The Food Of The Gods on public television one Saturday afternoon.

Yes, The Food Of The Gods….a 1976 movie adaptation from the H.G. Wells novel about a mysterious “food” that comes up from the earth that animals and insects feast on to become gigantic versions of themselves.  And I’m not ashamed to admit that it scared the shit out of me as a kid.  Need some proof? Take a look at this frightening clip!

Oh my god!  That was…….pretty terrible.  I’ll give that obscenely big fake chicken some credit though because it didn’t give up.  Just kept on pecking and clucking until it met it’s timely demise.  This was 1976 after all, so let’s cut the special effects some slack.  If giant chickens aren’t your poison, then maybe you’d be more inclined to have a big helping of giant rats?  I ran into a bunch of these when I lived in Chicago by the way.  True story.

That was actually somewhat terrifying the way those rats were gnawing at that poor bastard on the ground.  Fun fact:  The sequel was called Gnaw: Food Of The Gods II and it was awful.  Did I say awful?  I meant tremendous in an awful kind of way.  But back to The Food Of The Gods and how it made me pee my pants in terror as a child.  To be perfectly honest, this movie had as big of a horror affect on me as Night Of The Living Dead did.  A bit crazy?  Yeah. And I know that The Food Of The Gods is not all that scary if you watch it today, but you have to appreciate it on some level for what it was back then. Where else are you going to see giant grub worms attack a lady’s hand? 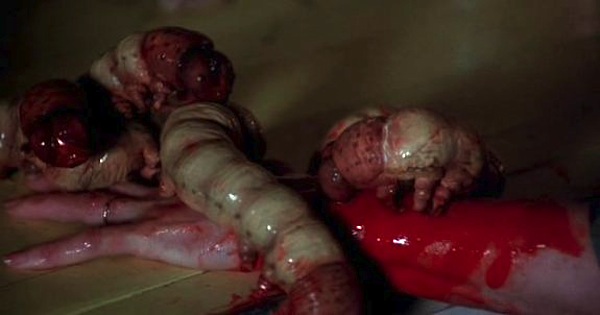