Do you ever get the feeling that someone is following you?  Maybe an old lady who shuffles aimlessly towards you at a snail’s pace?  A normal looking guy with an Abercrombie & Fitch shirt on?  Or maybe a naked lady with no front teeth who pees uncontrollably on the floor as she gets closer?  That last one may seem a bit specific, but not if you’ve seen the new buzzworthy independent horror film, It Follows.

Now, as this review continues on, I will do my best to keep it spoiler-free because most of the fun you’ll have with this movie is if you go in fresh.  It Follows is a pretty brilliant first film from writer/director David Robert Mitchell. It’s a good feeling to see a small horror movie like this do so well, as it’s made a pretty obscene amount of money from it’s limited screenings, and will be receiving a more wide release in the weeks to come because of that.

It Follows opens with a serene camera shot of a small neighborhood in a metro Detroit town.  You almost expect the Leave It To Beaver theme song to start playing.  That is quickly cut short when a girl comes running out of a house in her high heels, frantic and looking at someone or something.  We the audience don’t see it, but she does.  This opening scene sets the tone for what’s to come, and what’s to come is pretty fucking creepy. 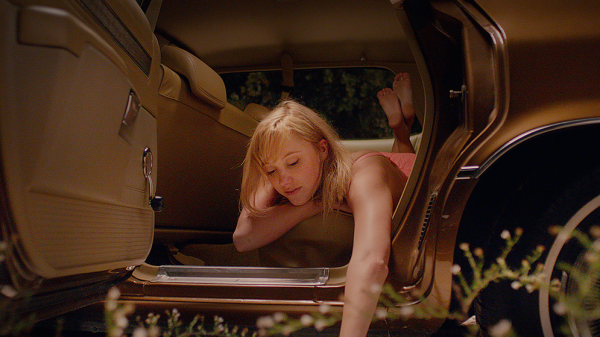 Our main character Jay (Maika Monroe) is super excited because she’s got a big date with her school crush, Hugh (Jake Weary).  It’s like a scene from a John Hughes movie – she’s got her pink dress on, gets her makeup all perfect, and meets him at the movie theater.  While waiting in line, the two play a ‘trading places’ game where they try to figure out whose stranger’s life among them they would switch with if they could.  Things are going great, up until Hugh sees a woman in a yellow dress that Jay doesn’t.  He frantically gets up and leaves, looking over his shoulder as he does, and the couple meet again another night and have sex in a car.  Seems like a logical second date, especially when Huge chloroform’s Jay and ties her to a wheelchair.  It’s every girl’s dream!

Huge proceeds to tell Jay what’s going on.  He had to sleep with her to get rid of ‘It’.  What exactly is ‘It’?  There’s no real explanation for that.  ‘It’ could be someone you know, or someone you don’t know that you can visibly see.  And ‘It’ will follow you.  Very slowly.  And if ‘It’ touches and catches up with you, then you die and everything goes in reverse from that point on, and the person who gave ‘It’ to the person who dies is in danger again.  So the trick is to keep passing it on – which means lots of sex will be had!  Confused yet by the way? It’s not as complicated as it sounds. 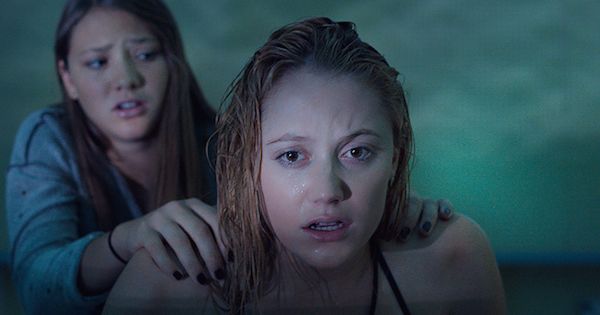 So now Jay begins seeing creepy people following her and confides in her sister Kelly (Lili Sepe), her friend Yara (Olivia Luccardi), her neighbor Greg (Daniel Zovatto), and her ex-boyfriend/friend Paul (Keir Gilchrist).  Did I mention that Paul is infatuated with Jay?  That’s a side plot that comes into play later of course.  The rest of the runtime of It Follows basically revolves around Jay and her crew running from people that only Jay can see (unless you’re able to throw a sheet over them), trying to figure out how to put a stop to ‘It’ once and for all.  Isn’t that a bitch by the way when you spend hours setting up an elaborate plan with a lot of electrical devices, only to have the plan amount to shit?

I’m intentionally dancing around a lot of what happens in It Follows because like I said, the less you know the better.  What I can say is that Maika Monroe is great as Jay and we just very well might have a new Scream Queen on our hands.  The rest of the cast does the job as well, and I never felt like I was watching a low-budget horror movie which is always a plus.  It Follows looks fantastic, and I have to give a tip of the hat (if I wore hats) to writer and director David Robert Mitchell for the overall concept and vision.  The movie was based on his nightmares that he used to have about a stranger following him.  Contrary to what people are going to probably think about It Follows after they see it, this is not a PSA for safe sex.  It may very well become that though. 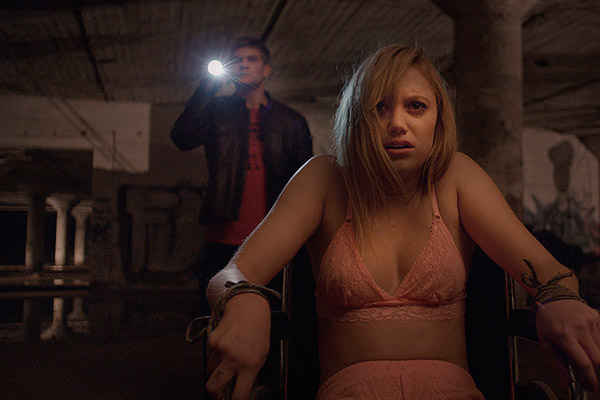 The music.  I have to talk about the music.  Disasterpeace took me back to the 70’s and 80’s with their synthy, quirky score and I pretty much grinned every time it came out of the speakers in the theater.  Music can really accentuate a movie, especially a horror movie, and this was the best John Carpenter score that John Carpenter never did.  I mean that as a good thing of course, and I’m definitely down for Disasterpeace to score some more horror films in the near future.

It Follows was creepy, and in my personal horror experiences, if you creep me out then you win.  So you win, It Follows!  Not sure what you win, other than this glowing review, but you win nonetheless.  Not many critiques I can give by the way, other than the runtime was about 10-15 minutes too long.  It felt a bit repetitive towards the end, but the finale made up for it.  The other thing that might turn some people off is the fact that there are a lot of unanswered questions.  If you’re the type of moviegoer that likes to discuss the movie after you see it and come up with your own interpretations, then it won’t bother you.  If not, then you might have a tough time with it.  For me, I wasn’t bothered any of that, and It Follows in my opinion is the horror movie to beat for 2015.