The housing market is booming right now, and it’s the perfect time to buy!  Just be careful if you come across an old house that used to be a funeral home and awakens every 30 years or so to murder whatever family is living in it.  Hey, it can happen.  And happen it does in the new independent haunted house offering, We Are Still Here.

There’s a lot to love about a horror movie that knows the kind of horror movie it is and wears it proudly on it’s bloody torn sleeve.  We Are Still Here is that movie.  I was reminded of the great Lucio Fulci while watching it and also had visions of 1973’s, The Legend Of Hell House dancing in my head.  It’s a pretty lean (84 minute runtime with credits), mean, blood spurting machine!

We start by seeing a clearly distraught Anne Sacchetti (played by scream queen vet Barbara Crampton) and her husband Paul (Andrew Sensenig) driving up to their new house in the New England countryside.  It’s then that we find out that their son has passed away, and they’re trying to cope and move on with a new house and a new life.  While getting settled in, something automatically feels off about the new digs, especially when their neighbors Dave (Monte Markham) and Cat (Connie Neer) come to pay a visit. 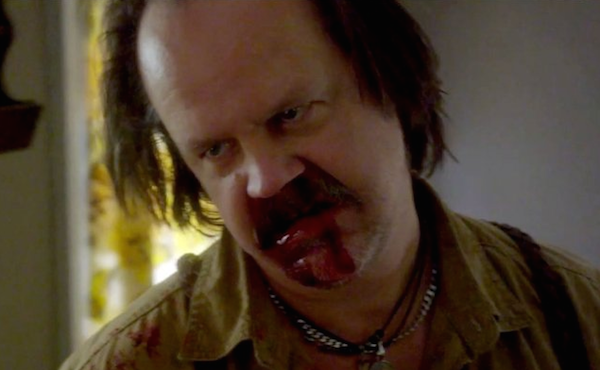 It’s then that Dave remarks that the house hasn’t had any fresh souls living in it in about 30 years.  Uh oh – you know what that means!  On top of that, Cat slips the couple a note while they’re leaving that says to get out.  But of course they stay the course and in the midst of some already strange occurrences, get their friends May (Lisa Marie) and Jacob (Larry Fessenden) to come visit.  Oh – did I mention that they both deal in the paranormal and are modern day hippies?  Perfect!

From there on out, believe it or not – more strange shit happens.  People go missing, the house “awakens”, the townsfolk all but grab some pitchforks, and Dave carries around a shotgun and really knows how to use it.  The bottom line is that I don’t want to spoil too much.  Just know that when the red stuff hits the fan, it hits it hard.  Want to see possibly the best blood spurting from a crushed head ever?  This is where you’ll find it.  For the most part, We Are Still Here was clicking on all cylinders. 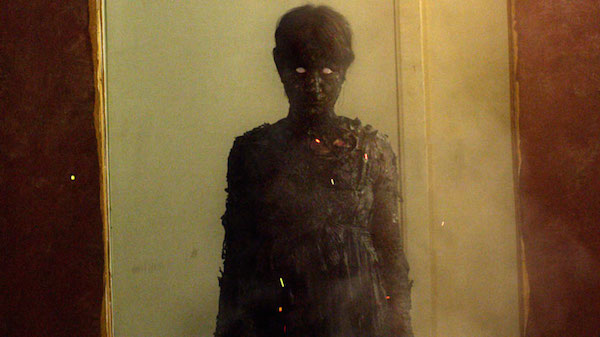 There were a few weak links in the mix, and I’ll try to be as kind as possible about them.  The most glaring negative was Lisa Marie.  It pains me to say that, and it honestly felt like she was seriously doped up while reading her lines, which is obviously a distraction.  I really don’t want to bash her, because she’ll always have a special place in my heart as Vampira from Ed Wood, but her performance here was definitely a downer.

In addition to her, the other no-no in my book was that We Are Still Here was basically a 75 minute movie.  I wanted more!  It was both nice and unfortunate that over the credits, they showed us old newspaper clippings from when the town first realized it had something demonic going on and that gave a little more back story to everything.  I just wish it would have been in the actual movie.

Overall, I have to tip my cap to first time director Ted Geoghegan (who also shares writing credits) for taking me back to old school horror.  We Are Still Here nailed the 70’s/80’s vibe that it was going for, and I for one would love to see it in a double-feature with Ti West’s, The House of the Devil.  It’s always nice seeing Barbara Crampton putting in work, and I loved Monte Markham as Dave, the crazy shotgun-wielding guy who has an agenda and is determined to stick to it no matter what.  A few things aside, We Are Still Here earned it’s stripes and should be appearing on a lot end of the year ‘best of’ horror movie lists (including mine).