With another year coming to an anti-climatic close, it’s time for me to reflect on the things that I’m thankful for in the horror world.  Let’s all hold hands and bow our heads and get into the thanking!

1.  I’m thankful that Ash has returned! 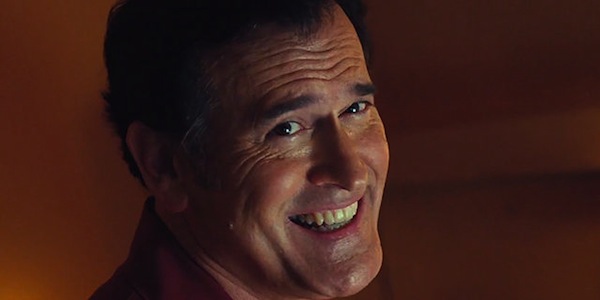 When it was announced that the Evil Dead franchise would be making a return in TV form on the cable channel Starz, a part of me was a bit skeptical.  Oh sure, Bruce Campbell would be reprising his role as Ash and Sam Raimi would be involved as producer and even direct the first episode – but I still felt a bit itchy about the whole thing for some reason.  Glad to say those itches turned into a horror boner because Ash Vs. Evil Dead nails everything that was fun about the three movies in the Evil Dead franchise and even manages to be gorier than all of them combined!  Let’s hope it doesn’t lose steam, and let’s hope Ash doesn’t lose his other hand.

2.  I’m thankful that the Paranormal Activity franchise is finally done!

Pardon me while I do my little happy dance.  The Paranormal Activity franchise is dead!  Woo hoo!!!  At least I sure as hell hope so.  But yes, after the terrible box office take and reviews for the sixth incarnation Paranormal Activity: The Ghost Dimension, I’m guessing that people finally got sick of this franchise and came to their senses.  Me personally, I never got into it and never understood the fascination with it.  Different strokes for different folks though.  Now if you are a die-hard fan who can’t bear to see the franchise end, I’ll give you a moment to grieve while I continue on with my happy dance.

3.  I’m thankful there was a movie made called Zombeavers! 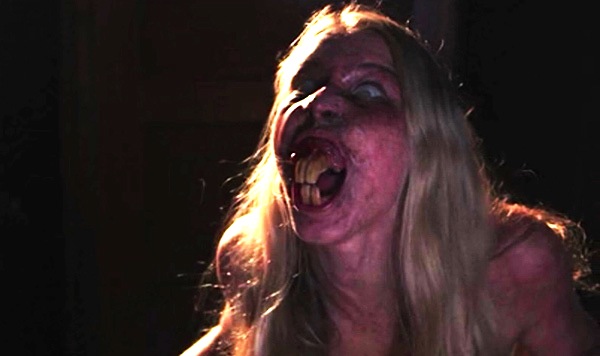 **Spoiler Alert**  Apparently people actually turn into zombie beavers in the movie Zombeavers.  Not too much more has to be said about this one.  This movie was actually made, and I like I said – I’m very thankful for that.  Much like the giant wasp horror movie Stung that came out this year, Zombeavers is a breath of fresh air that takes me back to the days when horror movies about killer slugs and ticks ruled the VHS section at your local video store. Amen to that!

4.  I’m thankful that Glenn is still alive on The Walking Dead! 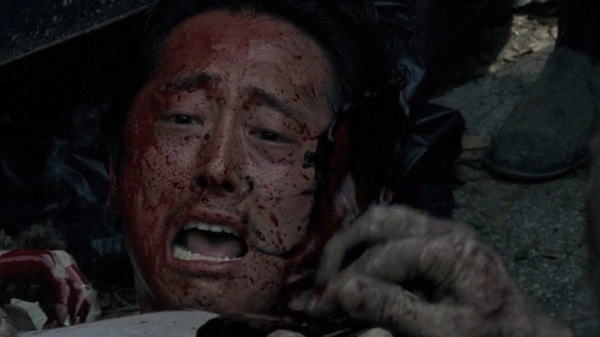 Wait.  What?  I know what you’re saying to yourself.  You’re thankful for Glenn being alive after that ridiculous explanation of how he escaped a horde of zombies, even though they clearly could have eaten him since most of his body and head were fully exposed??  C’mon now, you should know me better than that!  I’m thankful he’s alive because now hopefully they’ll follow his part in the comic (even though I haven’t read the comic, I know what happens) where he will meet his demise and it will make up for all of this bullshit nonsense of how he escaped and stayed alive this season.  Fingers crossed!

5.  I’m thankful I was alive to witness the genius of Wes Craven! 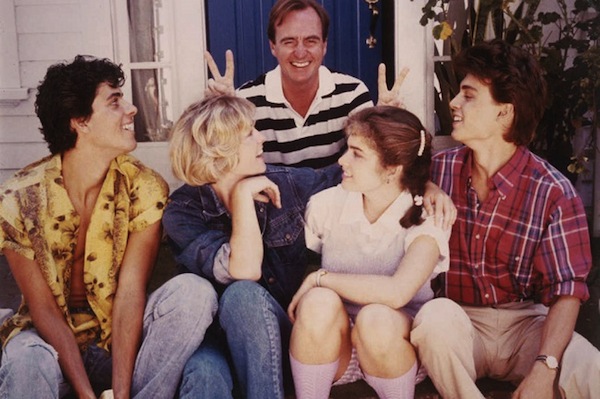 Around the time of Wes Craven’s passing this year, I wasn’t able to really write a retrospective about it and what his movies meant to me as a horror fan.  So better late than never, right?  I wasn’t even born yet when his first film The Last House On The Left came out in 1972, but it would end up having a huge effect on me later in my horror-driven life after I finally saw it.  Hell hath no fury like a penis-biting mother, right?  And then in 1984, A Nightmare On Elm Street was THE movie that really introduced me to horror, and to this day I still find new little subtle things that I love when I watch it.

Even after a few missteps in the early 90’s, Wes Craven reinvented the horror genre and turned it on it’s head with the Scream franchise in 1996.  Did I also mention that Swamp Thing has a cheesy little special place in my heart?  Wes Craven was an innovator, a true original, and we in the horror community are all in a better place because of his resume. RIP!  Oh – and Happy Thanksgiving, everybody!