When I first heard that Eli Roth’s Cabin Fever was being remade, I had to do some serious math in my head.  Add the 2, multiply the 4, carry the 3 and……holy shit – it’s been almost 15 years since it was released!  Even though that seems like a somewhat high number and makes me feel slightly old, I’m not sure it’s long enough to warrant the remake treatment.  But with Eli Roth’s blessing and guidance, writer Randy Pearlstein and director Travis Zariwny set out to accomplish just that, with early news breaking that they would ‘put their own spin’ on Roth’s original.  Well they must have been drinking contaminated water when they said that, because the only spinning going on here is from your head wondering why this was even made.  Harsh?  Yeah.  So let’s get into it.

Now if you haven’t seen Eli Roth’s Cabin Fever, I’ll give you a quick synopsis of what takes place in the remake here.  A group of five friends (Karen, Jeff, Marcy, Bert, and Paul) decide to take a trip to a remote cabin for a little getaway and pre-marital sex.  While there, they encounter some of the colorful town folk including a drifter who shows up at their doorstep one night after being infected with some kind of disease from his dead dog named ‘Pancakes’.  Subtle name btw.  From there on out, paranoia sets in with the crew and the trust amongst them is quickly heaved out the window. 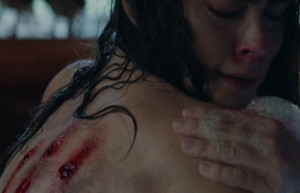 Karen (Gage Golightly) is the first of our fivesome to be infected after drinking water that is now contaminated after the drifter’s dead burned body ends up in the local reservoir.  Marcy (Nadine Crocker) is the most sympathetic, while Bert (Dustin Ingram) and Jeff (Matthew Daddario) are the least, and quickly decide to quarantine Karen in a shed outside.  It’s then that Paul (Samuel Davis) has to become the level-headed one of the bunch and try to get to the bottom of what’s happening.

Ok – let’s start with the good.  The acting wasn’t actually as bad as I thought it would be.  The dialogue was still pretty wooden, but the delivery wasn’t groan worthy.  I’m really selling this, huh?  Anyway, I was also pleased to see that the gore effects were mostly of the practical kind, and Karen’s death was pretty jawing – oops – I mean jarring (you’ll get the joke if you see the movie) and improved on the original.  As did Marcy’s demise by way of the infected dog.

Now onto the bad.  I just can’t really find any real reason why this movie exists.  It’s pretty much a shot-for-shot remake that doesn’t add anything fresh to Eli Roth’s original creation.  There are a lot of risks that could have been taken with both the story and overall look of Cabin Fever, but in the end it’s as though the filmmakers were literally sleepwalking through the whole experience.  Either that or they were ‘scared’ to go against Eli Roth’s version too much.  It all just feels so overly safe to the point that it’s maddening.  I understand trying to introduce the younger generation to the movie and concept, but take some chances on it, man!  This is where remakes like Dawn Of The Dead and Evil Dead succeeded.  If you’re going to have the same exact story and scenes in a Cabin Fever remake, then at least give me a gratuitous Cerina Vincent cameo or something. 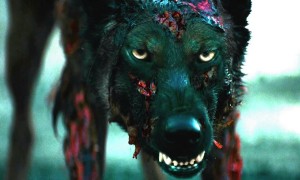 There are a few hidden gems to be found here, but you have to search really hard for them and have a super-powerful microscope to eventually see them.  By the way, don’t get me started on what the remake did with the Deputy Winston character.  All of the charm and intended humor from Eli Roth’s movie is gone here and replaced by too much seriousness and dull characters to boot.  Eyes will roll at the lame attempt of adding the current ‘social media’ craze into the film, and how do you fail at the ‘pancakes scene’ that badly?!?!  Ok – I’m getting myself all worked up now.  Calm down, Tony.

The bottom line:  If you’ve seen the original Cabin Fever, there isn’t really a need for you to see the remake.  I was hoping director Travis Zariwny would have had some balls with his version, but instead this is creative castration at it’s finest and it only makes me want to go re-watch the original to appreciate the things I liked about that one.